The ‘McKayla Maroney is not impressed’ memes are hilarious 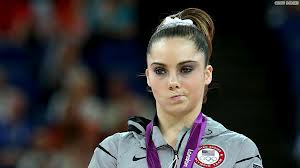 McKayla Maroney is not impressed. But, she is a good sport.

Somehow, the “McKayla scowl” has managed to linger far after the closing ceremony at the 2012 Olympic Games in London. If you don’t know the story behind the “gone viral” image, let me fill you in:

McKayla Maroney was a member of the U.S. Gymnastics team. After falling during the individual vaulting competition, she had to settle for a silver medal instead of gold. And, in the moment, her feelings were clear on her face as she stood on the medals stand.

Now the infamous scowl has been attached to a plethora of images yielding hilarious results. The associated Tumblr page (here) is still posting her image in interesting situations on a daily basis (Here are some of my favorites: here and here). Perhaps the most interesting development has been her own appearance on Stephen Colbert’s The Colbert Report where she reproduced the face (Watch the video here). Now that we know that she gets it and that she can even take her own actions in stride, funny or not?

What say you Water Cooler community?