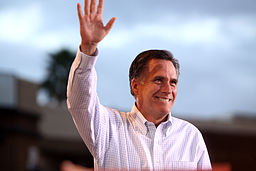 This week, a “secret” video picturing current Republican presidential nominee, Mitt Romney, was released by Mother Jones, a well-known online news source (About Mother Jones). In the video, Mitt Romney spoke candidly to a private group of supporters in Boca Raton, Florida about himself, his family, his perspectives of President Obama, and, most notably, his views of President Obama’s supporters.

Romney said some interesting and extremely offensive things about the “47%” of people who are likely to vote for Obama in the November elections sometimes calling them “victims,” “entitled,” and people who do not take “personal responsibility and care for their lives.” So, were you one of those people, like myself, who didn’t even bat an eye upon hearing this news? Were you completely underwhelmed with the mass hysteria which resulted from this breach of secrecy in the Romney Campaign? I have a lot to say about the things he said but I can’t say they shocked me at all.

Mitt Romney was raised about as “American Pie” as it gets. He grew up pretty wealthy in Detroit, Michigan. He was wealthy enough to go to Harvard twice, for an MBA and a JD. He had a father with a long history in the American automobile industry and, later, state politics. His father, George Romney, was an inherently authentic man who was unwavering in his beliefs, whether political or moral.

And, throughout Mitt’s many campaigns, he has attributed his father with much of his fervor and desire to hold political office. But, Mitt Romney is no George Romney. American national elections circa 1960 really hold no candle to the shameless politicking of today. And, Mitt learned from his father’s example that being earnest, forward, and truthful could kill a campaign before it even began (Source). So, here is what we’re left with. A “Rombot” who holds secretive meetings in mansions with people who already like him talking about everyone who may or may not vote for him with vitriol and disdain.

Commentary on Part 1: Again, not surprising right? A few things are worth noting.

If you prefer to read the entire transcript, please see it here.

Well, to put it simply, all I could think of while watching this was “duh.” We all know how Romney feels about President Obama’s supporters who are more likely to be minority, lower to middle-class, young, and less well-established than the well-to-do audience Romney was speaking to. Let me explain why I was so thoroughly unsurprised when I heard this news.

First, back in February, Mitt told us he was “not concerned about the very poor” (Source). He then attempted to save face and explain the comment but the damage was already done. What he was saying then, which has only been reiterated in his recently exposed video, was that he believes that certain classes of people in this country are protected by social welfare programs. You know, poor people, students, older people, women, heck, pretty much everybody. Well, those are the people he is the least concerned about. Mitt was showing his seams even back then.

Second, Mitt is a devout Mormon, who once was a Bishop in the Mormon Church, and his faith certainly colors his political leanings (Source). And, although this facet of his character should not be politicized, I will speak of it delicately to emphasize an important point. The Rolling Stone piece above notes that this faith teaches that the “Negro” is “cursed.” So, Mitt was a lay leader of a Church whose doctrine proclaims that Blacks are inherently bad and not worthy of the grace of God.

Similar comparisons may be made with President Obama’s Christian background and its stark teachings against homosexual relationships. But, the one thing that differs between the two men is that President Obama has openly expressed his support of LGBT rights. He has also upheld his promise to repeal “Don’t Ask, Don’t Tell” or DADT. Mitt, on the other hand, continues to make comments and gestures that not only undermine his attempt to win over ALL Americans, they also ostracize and alienate those very Americans who are “cursed” under his religious doctrine. Coincidence? Probably not.

Overall, Romney presented himself like the arrogant, fraud that he is and has been for some time now. And, the saddest part to me was the enthusiasm and laughter from his well-off, “higher-than-thou” audience. On several occasions, they chimed in with witty retorts about women and minorities that most would never say in public. But, no one asked Romney how he would fix Medicare or help create jobs or what his plans were to rebound the economy. You know why? Because they didn’t and still don’t care about any of that. They just want to win.

And, if that means that the 47% gets left in the dust, so be it. As we, because I guess I am included in that 47% as well, are all pushed off of the economic, educational, and social maps, we will probably just land gently in the soft spools of cottony fiber wound into our social safety nets. And everything will be fine. Why? Because someone should be taking care of us. We don’t want to work hard. We don’t want to earn our living. We just want to mooch and freeload. Right?

I actually used to like Romney a lot. He did some amazing things in Massachusetts like healthcare expansion and deficit control (Source). This could quite possibly be the end of his campaign though.When he ran against McCain in 2008, he seemed like someone who genuinely cared about ALL of his constituents. But now, Romney is drunk on the D.C. Circuit Kool-Aid. He’s high on the Washington Wind Pipe. And, I don’t think he’s ever coming down y’all…say bye bye. No more Mr. American Pie…this’ll be the day the Romney campaign dies.