Movies You Shouldn’t Be Watching: Skyfall 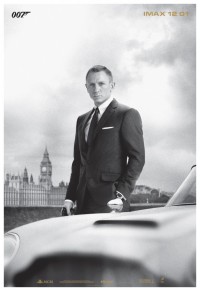 Okay, so, yeah, umm, Skyfall. It was a James Bond flick. Lots of things went bang. A whole bunch of other things went boom. There was a villain (kind of). And, Daniel Craig was Bond, or 007, or whatever. I was like, “meh.”

So, the boo and me went to see this movie last weekend. I meant to write the review then. However, I was so underwhelmed, I am just finishing it now. The story behind the flick is as follows: Bond does some crazy stunts on cars and stuff, he seems like he’s dead, but shocker! He’s not (hence there being an entire movie about him). Then, he comes back and some chicks find him irresistible and want to hump him. Then he seems like he might get killed by a villain, and then…okay…I know this sounds like every other Bond movie in the history of ever. And, truthfully, that’s was what it was.

I would probably call it a Bond “coming of age” flick. They tried to shed some of the old idiosyncracies of the past. And, they even attempted to give 007 some depth. But, the truth is, it just isn’t Bond if it isn’t old world. And, Daniel Craig is just not that hot. Really. The women swooning all over him looked like college aged girls chasing their Astronomy teacher. He never sold me on personal and family issues. And, I didn’t get much from him except that he was really really focused. Like, the whole time. In all, it wasn’t terrible. I just couldn’t totally rationalize spending more than $12 bucks to see it. And, I would have preferred to watch it from the comfort of my couch.

I won’t critique the entire film so as not to give it away to those smarties who haven’t gone to see it yet. But, I will say, this was the least aptly named Bond film to date. And, there’s no real Bond girl. Naomi Harris attempted to fill those giant shoes but for me, she just gets a “meh.” Javier Bardem was impeccable as this installment’s villain though. I mean, he was on par with Heath Ledger in The Dark Knight. So, if you’re a Bardem fan, by all means, go enjoy his work.

Nonetheless, there was a high point of the film. I guess you might call it a crescendo. It was in the first 20 minutes when Adele sang the trademark Bond song. This one was called “Skyfall.” Yes, something is truly wrong when your favorite part of the movie is Adele singing. See the preview below with her singing the track. Doesn’t it look so much better now?

In all, I didn’t love it. And, its a movie you shouldn’t be watching because (drum roll please) Twilight: Breaking Dawn Part 2 is out and its a much funner experience.