Movies You Should Be Watching: Twilight: Breaking Dawn, Part 2 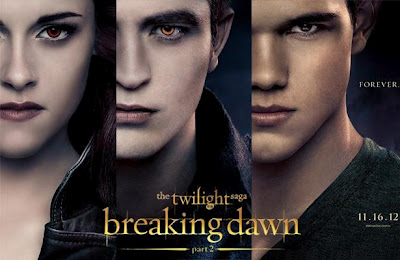 Alright alright, don’t write this off as another chick who likes chick flicks reviewing the chickiest chick flick in the history of chickness. I. Hate. Chick flicks. Anyone who knows me knows this to be true. And, to date, my favorite parts of the Twilight Saga have included a half-naked Taylor Lautner and gratuitous scowls from Kristen Stewart. I usually find myself laughing through the films. But, I must admit, I enjoyed Breaking Dawn, Part 2.

Yes, the entire series is based on an asinine concept.Girl meets vampire, vampire thinks she smells great and begins an unhealthy relationship with her. Vampire gets overwhelmed by his feelings for his food and runs away. Girl falls in love with hot dog (I had to do it). Hot dog answers all her prayers until vampire resurfaces to marry her and knock her up with a zombie baby…Oh Stephenie Meyer, you really have quite the imagination. I never read the books so I have not been brainwashed. But, I can only imagine that they’re a spectacular and engrossing mess from beginning to end.

And, the whole relationship between Bella Swan (Kristen Stewart) and Edward Cullen (Robert Pattinson) is sketchy for the first two installments of the franchise. But, they did a great job of tying up all the loose ends this time around. They had an ample number of flashbacks to our favorite moments of movies past. And, their chemistry was totally natural. Without spoiling it for you, they really convinced me that they were loving parents. Bella was a strong lioness as opposed to her usual whimpering and cowering self. She was take charge and she looked more alive than ever. This, is slightly ironic since this is the first movie where she was supposed to be dead the entire time. Edward was the doting father. And, he took a step back from the protector role so that Bella could flex her muscles for a moment. It worked.

Jacob Black (Taylor Lautner) played a supporting role in this film as most of the focus was on Bella and Edward. And, sadly, he only removed his shirt once in the movie (le sigh). Is it me or was he hotter with long hair? Regardless, everyone’s acting chops slightly improved from the last Breaking Dawn flick. This is not to say that there weren’t silly moments, poorly executed lines, and fake looking CGI. There were, plenty of them. But it was never so bad that you couldn’t stay focused on what was going on.

I must say, there were some interesting supporting cast members featured in this installment. There were half-dressed Amazonian women, electrifying Canadians, nomadic warriors, and a host of others. And, the epic fight scene, that was the pinnacle moment of the film, was a little lean. But, somehow, it still worked.

I say, guys and gals, go enjoy the movie. And don’t be ashamed if you look around and there are only chicks in the room. In my experience, all the dudes sneak in after the previews come on.