On the ‘Crooked Room’: Melted Butter, Stereotypes, Me

Have you ever watched butter melt? It is actually quite interesting. There are several options when melting butter you know. One, you can simply leave it out on the counter and let it rest for a few minutes or hours depending on whether it was in the freezer or fridge. Two, you can melt it on the stovetop. Or, three, you can just pop it in the microwave and hit the “melt” button. I melted some butter this weekend while making my kids a batch of pancakes. And, as I watched the tall chunk of dairy goodness become swallowed up by the plastic measuring cup, I felt myself drift away a bit.

I became incredibly intrigued by how the butter melted. Some parts melted down faster than others, more impacted by the microwaves I was subjecting them to. Others stood firm for a bit before giving in and melting down. In the end, the bubbly pool they created engulfed what was previously a solid into a sloshy liquid substance. It could be re-frozen or refridgerated but that particular stick of butter would never be the same “stick” again. I had permanently changed the fundamental make up of my stick o’ butter by subjecting it to the intense, systematic pressure from my microwave. And that was that.

Yes, this seems a bit random. But not totally when you think about it. I have been revisiting a book I love called Sister Citizen: Shame, Stereotypes, and Black Women in America by Melissa Harris-Perry. I have a series up on Beyond Black & White dedicated to commenting on the insidious nature of stereotypes of black women. But, this post is a little different. Here, I really want to address the methodological nature of the stereotypes. Not the why, what, who, or when that my series handles. But, the how. 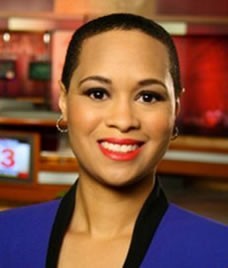 A great example of this “melted butter” pathology is a story of a young, intelligent and beautiful black woman named Rhonda Lee (pictured left). Lee, up until last week, was a meteorologist for KTBS-TV in Shreveport, La. However, after an exchange with a viewer on Facebook, the station severed ties with Lee. Before reading the exchange, understand that the station has said that Lee was fired not because of her appearance but because she responded to the viewer. It was not because they found her words inappropriate but simply because she said anything at all.

The viewer posted the following on the station’s Facebook page discussing Lee.

“the black lady that does the news is a very nice lady.the only thing is she needs to wear a wig or grow some more hair. im not sure if she is a cancer patient. but still its not something myself that i think looks good on tv. what about letting someone a male have waist long hair do the news.what about that(cq).”

And, Lee responded as follows:

“Hello Emmitt–I am the ‘black lady’ to which you are referring. I’m sorry you don’t like my ethnic hair. And no I don’t have cancer. I’m a non-smoking, 5’3, 121 lbs, 25 mile a week running, 37.5 year old woman, and I’m in perfectly healthy physical condition.

I am very proud of my African-American ancestry which includes my hair. For your edification: traditionally our hair doesn’t grow downward. It grows upward. Many Black women use strong straightening agents in order to achieve a more European grade of hair and that is their choice. However in my case I don’t find it necessary. I’m very proud of who I am and the standard of beauty I display. Women come in all shapes, sizes, nationalities, and levels of beauty. Showing little girls that being comfortable in the skin and HAIR God gave me is my contribution to society. Little girls (and boys for that matter) need to see that what you look like isn’t a reason to not achieve their goals.

Conforming to one standard isn’t what being American is about and I hope you can embrace that.

Thank you for your comment and have a great weekend and thank for watching.”

Most who have read the response felt that Lee responded with grace and understanding. She has said that she believed that the viewer honestly had no idea how “our hair” grew or what her style of diversity meant in the larger “American” spectrum. But, where she saw a teachable moment, the news station saw an unruly act of confrontation. Contrast this with another reaction from a news personality which I have previously written about on this site.

Now, granted, this issue was on another station and the nature of the initial concern was more abrasive than the Lee case. But, wouldn’t you say that her action was totally warranted? She had a spot on her broadcast dedicated to responding to a “bully.” While Lee, on the other hand, wrote a brief response on a Facebook page with no confrontational tone or denigration for the viewer. Her response was significantly more understated but received extremely harsh action from the station.

Lee saw this as a teachable moment. She thought she might take the opportunity to highlight a need for diversity and acceptance of other cultures. Instead, Lee’s teachable moment turned out not to be a teachable moment for the viewer. But, it became a moment teaching her that she does not get to set the tone for anyone. She has only a small role the grand scheme of acceptable norms and her role has been prescribed for her. She can only be the Jezebel (whorish), the Mammy (homely and docile), or the Sapphire (angry black woman). And no matter how composed she was in this exchange, she was pegged as a sapphire who “repeatedly” breached the station’s policy regarding correspondence with viewers.

What about the topics these two women were addressing? Lee was addressing commentary about her natural black hair style. The news anchor at CBS was addressing a more socially acceptable topic: obesity. It seems that because Lee’s issue arose around a scary little secret we have in this country called “race,” the station seemed more inclined to take a hard line against her. Imagine if this had been about obesity? Or, if Lee was indeed suffering from cancer, what do you think would have happened then? Certainly the station would not fire someone for speaking out about an ailment that we all understand and care about. But, black hair, puhlease. They basically told Lee to have several seats on that one.

Does this mean she will stop wearing natural hair? No, probably not. But, she may be reluctant to discuss it on a grand scale in the future. If she does, she knows that she will be seen as “going against the grain” or “making a big deal” of something when she is simply asking for the right to be herself. Her response was one of unapologetic concern for an unaware viewer. But, the station reinforced the notion that black women should be apologetic when others cannot digest their presence. If she had been wearing a long straightened hairstyle to begin with, none of this mess would have ever happened, right?

These messages about what is important, what is a real concern, who’s figure holds more value than another’s, and who gets to set the agenda on race dialogue in this country teaches young black women to devalue themselves. Not only that, it begins the process of systematically reshaping, melting them into a shape that works best for the “American” recipe. It is our misshapenness that makes us palatable, acceptable, and “normal.” It is our melted form that makes us fit better into the predesignated category carved out in advance of our arrival. And, it is this contorting and bending that we learn in the crooked room.

I Guess That Makes Me Melted Butter?

Well, yeah, I guess it does. When I think back to the systematic pressure I faced in terms of messages about my hair, skin color and texture, voice, intelligence, abilities, and fundamental being, I was being permanently altered into something, someone else. This is not to say that I am not the same person. Indeed I am. But, my outlook, experiences, vision for myself and my posterity, priorities, values, etc. have all been perpetually cycled through a conveyor belt of microwave-like messaging. So, who is to say what I might have been like had I avoided the microwave to begin with?

Black women are not the only folks who suffer from this melting butter pathology. Pretty much everyone does. Men and women alike. But, I find, as a black woman myself, that these microwave-like pressures are almost inescapable. When I walk into a restaurant and no one holds the door for me, it teaches me that I am less womanly than others. When I order my breakfast and am called “senorita” while the young white woman ahead of me is called “bonita,” it tells me that my type of beauty isn’t the generally accepted form of beauty in America. When I joke with my friends about a work altercation and someone repeatedly tells me, “Jenn, you’re always so angry,” it tells me that my kind of emotion is not acceptable emotion. My feelings are somehow worse and more dangerous than others because I am an angry black woman.

I have contorted. I tried being a hoe once in high school. Luckily, it was a short-lived epic fail. So, Jezebel never fit. I tried doing the whole angry black woman thing and honestly, that was just strenuous. You have to walk around frustrated all the time pissing folks off. Not my thing. So, Sapphire didn’t work. I was called an “old woman in a shoe” by another black woman when I was 23 years old because I said my husband and I wanted to have a big family. But, I work outside the household, am relatively fit, and pretty darn sexy so I guess I am no Mammy. So, what am I? Well, I’m melted butter.

I am a little bit of all of those things wrapped into one. Every one of those experiences shaped and shapes me. And, my original form is gone. I am no stick. I am more of a warbled gooey mess held together by caffeine and Kleenex. But, my new warble-y form makes sense to me. It feels good. It looks so crooked to everyone else but feels so straight to me. My natural hair feels just that, natural. For the first time, every hair and nail on my body grew from my actual follicles. My makeup bag rarely gets a visit from me. And, it feels good. So, I don’t feel bad about being melted butter.

Because, I am melted butter. I am stereotypical. But at least now I am fully me.

Want to buy the book? Use this link.