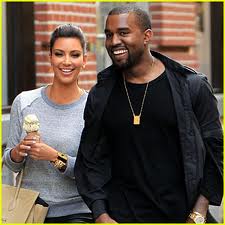 Kanye West spilled the beans this weekend about he and Kim’s bun in the oven. Shortly thereafter, media outlets worldwide began confirming the news. And, Kardashian and Jenner family members took to Twitter to pronounce their abundant excitement for the expecting couple. And, so it goes in the world of Hollywood promiscuity, unwed parenting, and baby-clutch-purse phenomena. You know, it’s that thing where you’re whorish and you have a baby with someone you haven’t been with for very long after breaking up with someone else you hadn’t been with that long and then you carry the baby around so all the paparazzi can see it. Right. That.

He’s such a romeo…called her his baby momma and everything {tear}.

Not sure how I feel about this one. My first question was, “why would someone put a baby in there?” But, then, I was immediately reminded of the fact that said ‘someone’ was none other than Kanye “Jesus Walks” West. You know, the guy who has absolutely no couth and is such a joke in the personality department that he is parodied on Saturday Night Live without even actually having any current music on the radio.

And, then, well, it kind of made sense. Kim Kardashian has proven herself to be a fame loving sperm receptacle who’s greatest accomplishments, to date, still rest on her ability to bed well-off men. So, it would suffice to say that she has perfected the art of “Pretty-Woman”-ing every man she meets. So, the real question is: will Kanye West marry Kim K.?

Here’s the thing. She is really pretty. She has great assets (from the machismo, misogynistic perspective of assets). And, well, she’s like the Superbowl trophy. Every year, a new fleet of young black men face off to see who will go home with her. And this time around, Kanye’s the champion. So, congratulations Kanye…kind of. You’ve successfully impregnated a “sleep with.” You know, a girl that you hang out with with the prime intention of one day sleeping with her cause you heard from a bunch of other people that its fun to do. Yeah. That.

I am not trying to go in on this chick just because it is fun. Truthfully, I have no respect for a woman who continues to prove that she has no pride, self-worth, or general understanding of what it means to be a positive female image. And, to think that in a few months we will be seeing rampant magazine covers in the local grocery store with the two of them and some poor unsuspecting baby in need of guidance and direction, it is truly frightening. Bone-chilling even.

Nonetheless, I say congratulations. The good thing is, every few months we have something new to talk about with these two. For Kim, first it was a sex tape, then it was a TV show, next she was dating a model, then a football player, then she got married, then she got divorced, and now, a baby. For Kanye, he compares himself to Jesus Christ (you know the Savior), then he completely humiliates Taylor Swift on stage, then he makes a video where he pukes out a demon or something, then he starts dating Kim K., then he wears a leather kilt, and now, a baby! Yay.

I predict that this poor child will be the most beautiful little train wreck the two have ever produced. Mazel tov!