The Music You Should Be Listening To: Jhené Aiko 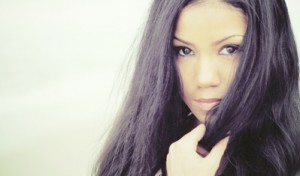 This L.A. native may only be 24, but she is nearly an industry veteran. Her first exposure to the music industry was through two of her older sisters that were in the short lived girl group, Gyrl. Though the group eventually turned to dust like much of the 90’s cannon fodder, they did tour with Immature as their opening act. It was this connection that brought Chris Stokes and Jhené together.

The two kept in contact and he facilitated a recording contract for her with Epic Records at the same time that B2K landed their deal (both under the T.U.G. imprint). The marketing strategy for the two acts was for B2K to be the lead, with Jhené billed as Lil Fizz’s cousin (though they have no blood relation). She was featured on a number of B2K songs, toured as their opening act, and had songs placed on a number of soundtracks, but her relationship with Epic eventually dissolved due to tension. Her only single from her unreleased debut album was 2008’s NO L.O.V.E..

After taking a break from the business, Jhené is now back with a more mature voice and more adult subject matter. She released her mixtape “Sailing Soul(s)“ on March 16, 2011, the title being a reference to her stance against selling herself to the industry and deciding to “sail” instead. The mixtape has features with such industry big names as Miguel, Drake, and Kanye West. Standout tracks from the mixtape include:

And now, Jhené is ramping up to make a big splash on the music scene. She has been featured on songs for major artists such as Wale, Big Sean, and Kendrick Lamar, as well as serving as the opening act on the “Life Is Good/Black Rage” tour that was headlined by Nas and Lauryn Hill. She was also signed to Def Jam imprint Artium Records in 2012. And since that signing, she has been busy building the buzz. The video for her song SNAPPED (embedded below) shows her artistic side, with the entire video being hand-drawn anime. It also showcases her delicate, yet strong and distinctive vocals.

Another of my favorites is In Love We Trust, a testament to the struggles people face and the importance of believing in one another.

And on September 4, 2012, Jhené released her official first single 3:16AM, off of her upcoming debut album entitled “Souled Out” (buy on iTunes here). The video evokes the feeling of a scary movie with it’s use of spotlights, camera angles, shadows, and color schemes.

As an added treat, Jhené released a video to her song Mirrors on December 5th, 2012. The visuals play heavily on the critically acclaimed movie Black Swan with the duality of character and the ballet setting.

WriteToLive’s Verdict: Jhené is truly an artist that has strived to do things her own way. Her music is distinctive, not following any type of trends. Her lyrics are emotive and relevant. And most importantly, her voice stands out amongst the “radio friendly”. It is an instrument that she continues to master. Her tone is impeccable, and she knows how to use her talent for maximum impact. Just imagine Cassie or Ciara … but with a huge dose of musical know-how, vocal refinement, and soul. At times Jhené is haunting, but she is always intriguing. She’s fresh, undeniable, and always unforgettable. And Jhené Aiko is definitely someone you should be listening to.