Did You Love Super Bowl XLVII or Hate it? I Know What Beyonce Fans Will Say…

So, yesterday was Super Bowl Sunday. And, amidst our normal hustle and bustle of Sunday mornings, we actually started talking about it with a little bit of excitement. Now, if you know us, you know this is rare. We do not have the deepest appreciation for the institution of the NFL. But, all of the pomp and cirumstance surrounding this huge football game seemed really cool. We actually really enjoyed watching it too. You know why? Well, because every single headliner was a black woman with amazing singing chops!

This year’s face-off took place in New Orleans, LA at the Super Dome. The San Francisco 49ers and the Baltimore Ravens were poised for an epic competition. The head coaches for the teams are actually brothers. And, the fans on either side had been EXTREMELY fanatical about this year’s big game. In the end, the 49ers had a really poor showing. Even with the lights turned off for over thrity minutes Super Bowl viewers could see the writing on wall. As someone from the Bay, it was pretty embarassing. But, hey, the singing was great! 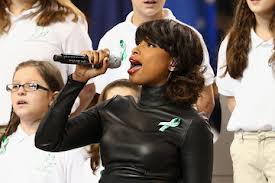 The event started off with Jennifer Hudson leading a chorus of children from Newtown, CT. she led the small group of children in singing “America the Beautiful.” It was a beautiful rendition and it sent a powerful message. The tragedy at Sandy Hook Elementary School on December 14th of last year left many folks speechless and overcome with concern for our gun policy in this country. But, Hudson’s symbolic performance really made a tragic situation seem more hopeful. She did a stellar job.

Next up, we had the beautiful and talented Alicia Keys singing the National Anthem (while playing piano by the way). She jazzed it up a bit, giving the song her own flare. Though more understated than her other recent appearances, Keys looked gorgeous in her red dress and sleek short hair cut. While I wanted her to do more, I was actually okay with the fact tha she didn’t. 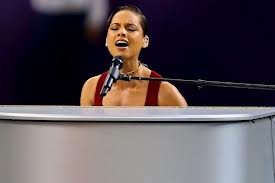 And, the event of the evening was a spectacularly glammed up performance from Beyonce and them. I mean Destiny’s Child. The star brought two of her second batch of Destiny’s Child members to shimmy around on stage a bit and be her back up dancers for “Single Ladies.” Kelly looked ravishing as usually. And poor Michelle looked lost as usual. But, it was nice to see them together again. Word is they will be reuniting for bit. So, while their performance wasn’t awe-inspiring, it helped re-introduce them to younger fans.

Overall, Beyonce pretty much stole the show. She might have single-handedly caused the blackout at the game. She girated, pelvic thrusted, and slid her way all over the stage for a solid ten minutes without looking the least bit tired. And folks have been denying this girl’s talent? Really? Interesting…

So, here’s the question: Did you love it? Did you hate it? Didn’t Beyonce kill it though?