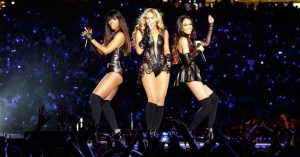 Did you hear what Keyshia Cole said about the Super Bowl performance? She somehow thought that she was in some kinda position to comment negatively on the quality of someone else’s vocals. Yes, you heard that right. Keyshia Cole tried to dog somebody’s vocal abilities. This is a case study in the perils of Twitter.

But first, let’s get some background.

According to Nielsen, about 1 out of every 2 televisions in the country tuned into the Super Bowl this past Sunday. I would then assume that would mean that those same people saw Beyonce do her thing at halftime (read a full recap here). And when Kelly and Michelle busted out of the floor, I’m sure that DC3 fans around the world rejoiced. They started off vaulting into “Bootylicious.” Then they transitioned into their Charlie’s Angels alter egos and took on “Independent Women”. And then there was the magical moment wherein Kelly and Michelle backed Beyonce in a full force rendition of “Single Ladies” (full dance routine included). In all of that, apparently Keyshia Cole saw an opportunity to throw shade and took to her Twitter account:

“F*ck that shit up then Beyonce! Bad b*tch central. I think I was frightened to blink for a sec. Then Michelle sung and woke my ass up from my daze! She always f*ckN the groove up.”

Then a slew of fans came out of the woodwork and smacked her down.

Yeah, they went in on her. And those were some of the more tame responses. She attempted to get back at them (with dismal results):

“And yes my mom uses drugs yes it’s hard. Yes I’m from Oakland and made it damn far without influential biological parents! But hey! I love y’all too! And y’all girl is WACK and always will be! Boss!!”

Now I must admit … Michelle is not much of a dancer. And her “Single Ladies” dance left much to be desired. I have enjoyed some of her solo material, but I’ll be the first to admit that her voice is clearly not for everybody. But (even with her mic turned down) Michelle’s vocals were pretty on point. And the group’s harmonies were quite beautiful. But I guess that Keyshia Cole’s trained ear spotted some inconsistencies?

I think Michelle should have just tweeted her back:

At the end of the day, it’s just straight tacky for any professional singer to criticize another’s art. I know Keyshia’s life ain’t been no crystal stair, but she’s been in the industry for a long time now. Somebody over her head needs to shut mess like this down and ship her off to etiquette school. This type of behavior is what alienates fans and starts messing with people’s money.

We haven’t heard much of a response from the DC3 camp to this, probably because they are laughing all the way to the bank (Beyonce, Destiny’s Child Feel Super Bowl Sales Surge), but leave it to Beyonce to keep it classy.

The real question here is whether or not it is Keyshia’s place to comment on ANYONE’S vocals.Was Keysh out of line? Is she trying to start an R&B fued? Has she forgotten how rabid Beyonce (and by proxy Destiny’s Child) fans are? Hit the comments section below with your thoughts.