Five Reasons to Play Halo With Your Boo

DISCLAIMER: This post is directed at the ladies. So, guys, if you read it too, understand that I am only seeking to better your personal and private life. Proceed.

So, yes, we love Halo. If you don’t know what it is then you have been under a rock for at least ten years, a very big rock. Halo is this lovely video game about a super soldier named “Master Chief.” In the four installments and several bonus in-between-y editions, Master Chief traverses the outer realms defending the Earth against a bottom-feeding alien race called “The Covenant” and a mutated zombie race called “The Flood.” In this most recent edition, Master Chief awakens an ancient foe named “The Didact”. And, an epic battle ensues.

So, now that you know what I am talking about and have deemed me a total geek, let’s get to the important stuff. There are at least five reasons why you should play Halo (or any other video game of choice) with your boo. 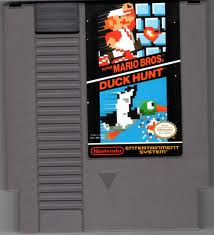 1. Playing video games is just plain ‘ol fun. I have always been a gamer. From “Duck Hunt,” to “Sonic the Hedgehog,” to “Legends of Zelda” (Gameboy edition no less), I have been one of those folks with a controller in my hand and my eyes locked on some type of screen. I owned the original Nintendo and stole moments of joy on my mom’s Atari. So, me and video games go wayy back. We go back like bologna and Top Ramen. We go back like “gubment” cheese and Wonder bread. I mean, we go back.

And, I have to honestly say, video gaming is a very fun thing. It is competition, personal challenge, teamwork, and defeat all wrapped into one. This isn’t to say that video games should stand in for healthy interpersonal relationships or take up the majority of one’s personal life, but, 2-3 hours per week with friends or a significant other could be a fun escape from the normal hustle and bustle of life.

It doesn’t have to be a role-playing game or an action game either. Systems like the Wii and Kinect are made for interaction. They provide hours of entertainment and encourage you to get off your butt and get moving. But don’t be like me and get a case of “Wii elbow” after playing for seven hours straight. Also, don’t do the crazy yoga stuff and end up in a orthopaedic boot for two weeks. Just words from the wise.

2. It builds a friendship. Well, it ruins friendships too, but let’s focus on the positives here. When a group of folks get together with the sole purpose of letting off steam, video games are a healthy way to go. The boo and I started playing video games with our friends during our freshman year of college and I would like to think that it was all that time together that laid the foundation for our relationship.

It is a great thing when two people who are romantically connected can find common ground in a non-romantic setting. And, for that, video games have always been a Friday night favorite in our household. 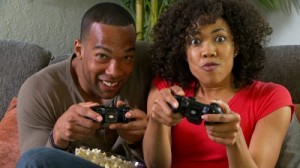 No, this isn’t us but the expressions are dead on

3. Guys have to come with us to the mall. We should be able to accompany them to the couch. Far too often, video games are associated with laziness and slothfulness. But, is it really worse than sitting down and watching TV shows or spending money haphazardly? Poor guys, they sit through our soap operas, chick flicks, mall visits, and hair appointments only for us to call their pastimes boring. Why not see if there are some games that both of you like? There are actually a ton of new games out there on many different consoles that are made for both genders. And, on many team games, the female characters go vastly underutilized. Let’s bring them back!

It might be fun resurrecting Princess Peach from her slumber.

4. It is empowering. There is nothing like having your boo dangling there, over the edge of the enemies ship, flailing and needing your help. You run over, take two shots to the Elite’s back and save your lovey from certain peril…Okay, that was dramatic. But, that is what it feels like sometimes. Guys can be really macho but they need help sometimes too.

There have been plenty of instances in our years of video game playing where the boo has fallen down a hole and gotten trapped by rogue “Hunters” and has had to call me in to save him. It feels great to know that we are a team both literally and virtually. And, I always feel like a gangsta when I take that one sniper shot to complete the mission.

5. (This is my favorite) It is really cute when they get all into it. I really love my husband. He is just a really cool dude. And, after seven years of marriage, ten years of friendship, and two beautiful babies, we sometimes need a break from the regimen. It is really fun to look over and see him taking a step back from work, the kids, the to-dos, the “Honey Do” list, and everything else to spend some time hanging out.

This doesn’t mean you need to run out and buy every video game you can think of. And, video games won’t heal an unhealthy relationship. But, there are a host of things that couples can do together to build that friendship foundation. Some folks like movies or golfing or wine-tasting. Whatever it is, go for it. Society will do everything to pull the two of you apart. It’s time to start doing things that bring you back together.