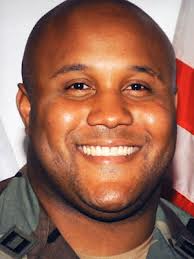 We first learned the name Chris Dorner (33) back on Super Bowl Sunday when a couple was murdered in Irvine, California. The young woman and her fiance were the daughter and future son-in-law of the prosecutor who represented Dorner  at the time of his termination from the LAPD in 2008.  And, now, the “made-for-the-movies” event in Southern California has seemingly ended with a burnt down cabin, a several dead bodies, and a major media flocking to the mountains near Big Bear Lake. Meanwhile, every police officer on the West Coast has been actively pursuing Dorner, shooting innocent citizens in their vehicles on at least two separate occasions. So, maybe Dorner accomplished what he set out to in the first place…

In the frenzy after he murdered these two innocents in their parking structure near their home, Dorner murdered a Riverside cop named Michael Crain (34). Likely a case of collateral damage, Dorner shot and killed Crain while in a shooting match with him and one other police officer who survived his wounds. In a 6-page manifesto posted on Facebook last week, Dorner explained in detail why he felt he had to “partake and complete [these muders] for substantial change to occur within the LAPD and reclaim [his] name.”

In the document, he detailed the conditions around his termination, the players involved, and his perceived reasons why he was treated in discord with what he believed he deserved. Citing racism and favoritism amongst superiors, Dorner claimed that his name was sullied by those seeking to quiet his concerns about the department. And, his proposed killing spree was to, not only clear his name (this seems a bit counter-intuitive), but it was also an attempt to shine a light on the LAPD’s core issues which, he believed, went unaddressed for years.

Last week, authorities were granted a “no-bail arrest warrant” which allowed them to apprehend Dorner anywhere at anytime. And that is where things started to fall apart. Last Thursday, Torrance police shot at least three innocent individuals due to mistaken identity. In both cases, the victims were driving a similar vehicle to the one driven by Dorner at the time of his getaway.

And just yesterday, we received word that Dorner was sighted in a cabin in Big Bear Lake, CA. To cap off this almost script-like story, police authorities burned down the cabin with Dorner reportedly still inside. Today, they found a charred body and Dorner’s driver’s license on the floor of the home. The body has yet to be identified formally but officers at the scene believe it to be Dorner.

Now, this story is truly unreal. I mean, it is real. But it’s so unreal. And there were folks who were cheering on Dorner as if he was some type of American Hero…yes, there are issues with law enforcement in this country. But, we have a US Constitution folks. This is not a “take up your arms” country. What Dorner did was not heroic. It was cowardly, vile, and disgusting. He murdered folks because of revenge, not justice. So, let’s not conflate his motives.

On the other hand, the LAPD, Torrance cops, and authorities all over SoCal should be ashamed of themselves for this ENTIRE debacle. No matter who is on the loose, you don’t shoot first and ask questions later. Women were shot while delivering newspapers. A man was shot while headed to the beach. Seriously?

And, let’s get to the fact that they intentionally burned this man alive. What is this? The Stone Ages? The Wild Wild West? The Ottoman Empire? Since when do we punish a murderer via death by burning? THIS IS NOT JUSTICE. And, no matter Dorner’s offenses, there are no legitimate laws which grant authorities the right to burn an American citizen to death on live television.

This whole situation is embarrassing and disturbing. Make no mistake, this man is not a hero. He deserves no martyrdom nor sainthood. But, in my honest opinion, he also did not deserve to die without due process of the law. This is a case of a termination gone wrong. Far too often, folks who feel they’ve been wrongly accused or punished go on vengeful killing sprees. Should we start burning all of them to death too?

At this point, I have questions about the remains. They may not even be his. What then?

What do you think? Were authorities within their rights by burning Dorner alive?