The 2013 Academy Awards ceremony was all set to be a grand affair. Hollywood’s elite came out in their designer duds. Ryan Secrest manned the red carpet. And Seth McFarlane was taking his first shot at hosting. Sadly, there weren’t many memorable moments from the night. Here’s a quick rundown in case you missed it:

Seth McFarlane had a pretty refreshing start to the night. His jokes walked the line between acceptable and offensive, like his comment about Django Unchained being the perfect movie for a Chris Brown and Rihanna date night. And the setup with Captain Kirk from the future guiding Seth toward having a successful run at hosting was brilliant and right in his wheelhouse.

However, some of the jokes were too juvenile for such a high brow event, such as his “song about boobs”, his reenactment of “Flight” with hand puppets, and his barb about the best actor to get into Abraham Lincoln’s head being John Wilkes Booth. But then again, this is Seth McFarlane. You get what you ask for … right? For the first time, the award show had a theme: Musicals. Cue the performances from past notable musicals. First was Catherine Zeta-Jones singing “All That Jazz” from “Chicago.” She gave us a good try and the vocals held up through the song, but sad to say, her age is finally starting to show.

Jennifer Hudson followed up, singing “I Am Telling You” from “Dreamgirls”, and it was everything you would have expected it to be. After she sang her final “You’re Gonna Love Me,” I pitied anyone that was going to have to take the stage after her.

So who capped it off? Well the ENTIRE cast of “Les Miserables” singing “I Dreamed a Dream.” It was a nice rendition, and it was a bit awe-inspiring to see so many big name actors taking the stage for a musical number all at once, but the spectacle of it all still didn’t hold s candle to JHud’s massive pipes.

Adele performed her nominated and winning theme song from “Skyfall”, and as we watched we could tell that something was missing. The sound seemed a bit off, and every time she hit the chorus, her voice was overtaken by the music and choir of singers. Add to that an already weak vocal and the absence of Bond action shots, and the song didn’t feel quite as stirring as it did in the theatre.

For this year’s “In Memoriam”, Barbra Streisand performed her classic tune “Memories”. For once, the music didn’t distract or detract from honoring those that had passed away in the last year. Nice touch, Academy.

Nothing too outrageous happened with any of the winners. No surprises. No oddball acceptances. But there was one victim of the short time allotted for acceptance speeches. The VFX supervisor for Life of Pi, Bill Westenhofer, fought to complete his litany of thanks as the orchestra played the theme to “JAWS”, slowly increased the volume until his mic was cut off and his team was escorted from the stage.

And probably the most notable moment from the night came when Jennifer Lawrence made her way to the stage to collect her award for “Best Actress”. She made it halfway up the stairs before she fell. The fall was inevitable given the sheer volume of the dress, and she played it off nicely by laughing at herself and making a quick segue into her thank you’s. 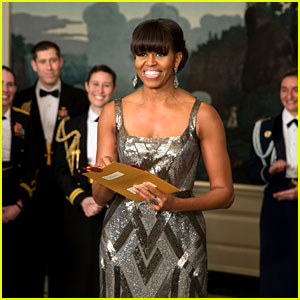 One of the coolest moments of the night came when the First Lady, Michelle Obama, announced the nominees and the winner for Best Picture. I initially thought that it might be a prerecorded presentation, but as she interacted with Seth McFarlane, it became clear that she was doing it live. That’s how you steal the spotlight.

“Here’s to the Losers” 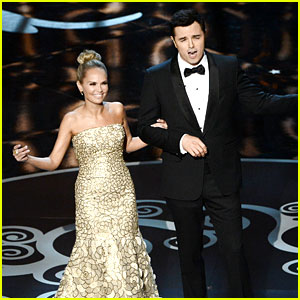 In the end, a night that I’d say was modestly successful was capped with an out of place musical number from Seth McFarlane and Kristen Chenoweth. Ending the ceremony and continuing as the credits rolled, the duo sang an original tune titled “Here’s to the Losers.” I get what McFarlane was going for with this ending, but the whole thing just came off as odd. Bring the levity, but I don’t think that anyone who lost was enjoying the serenade.

Did you watch the Academy Awards? Any favorite moments I didn’t highlight? Disagree with any of the winners? Share your thoughts in the comments!