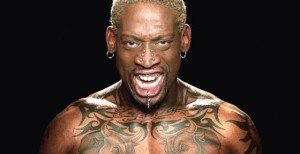 On February 28th, the infamous Dennis Rodman visited the one and only Kim Jong Un. Yes, somehow Dennis Rodman, whose career has devolved into being a Celebrity Apprentice flunkie, “headlined” a trip to meet the sovereign leader of North Korea. A nation that just conducted an underground nuclear test two weeks ago. How in the world does Dennis Rodman end up in such a high profile situation?

The trip is all due to a documentary that Rodman is shooting for HBO. The brainchild of VICE Media founder, Shane Smith, decided to use the nation’s love for basketball as a way to open communications.

“It’s weird because when you go there, it’s all very anti-American,” Smith said. “North Korean kids are fed anti-American propaganda from pretty much the day they are born. But it’s O.K. to like American basketball.” Apparently, Kim Jong-Il was obsessed with the legendary Chicago Bulls of the 90’s, and he has handed this admiration down to his son.

So, Smith recruited Dennis Rodman and 3 members of the Harlem Globetrotters. The Globetrotters played an exhibition game with some North Korean players while Rodman sat knee to knee with Kim Jong Un watching. (*SPOILERS* the game ended in a 110 to 110 tie …)

And now Rodman is throwing serious praise the dictator’s way.

“You have a friend for life,” the former basketball said to a crowd of thousands. He went on to say, “He’s proud, his country likes him – not like him, love him, love him. Guess what, I love him. The guy’s really awesome.” He thought that it was amazing that the North Koreans were “so honest”, and he claimed that Kim Jong Il and North Korea’s founder Kim Il Sung “were great leaders.”

Still, Rodman could have been saying all of this because he was on North Korean soil, right? It’s not like he would dog the man out before leaving. He could end up a prisoner in the deepest darkest cell in North Korea for that offense. But on March 3rd, he appeared on ABC’s “This Week” to talk about his recent trip. And he didn’t change his tune. He claims that Kim Jong Un doesn’t want war, he just wants President Obama to call him. And since the two leaders share a love for basketball, they should “start there.”

Okay, we all know that Dennis Rodman is a seriously touched individual. He has managed to sully a truly legendary basketball career by walking around in wedding dresses, appearing in a litany of reality shows, and being generally painful to be around. Remember, this is a man that is a 5-time NBA champion, a 2-time defensive player of the year, and the leader in rebounds per game for 7 consecutive years. But ambassador to North Korea? I don’t think that is putting America’s best foot forward, and I highly doubt that this is the type of individual I would want the North Korean leader to be making connections with.

I fully believe that the two might get along nicely after seeing some of Rodman’s television appearances. The man obviously has some demons he is dealing with. And one can only imagine the complexes that Kim Jong Un is dealing with in the wake of his father. But is this really a means of opening communications and negotiations across the Pacific? Will this help ease nuclear tensions? The only good I see coming out of this is high ratings for HBO.

What do you think about the trip? Does any of this mean anything? Do you trust nuclear weapons in the hands of any major world leader that excited to meet Dennis Rodman? Join into the conversation in the comments!