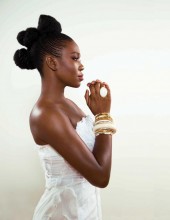 For all of those that have been patiently waiting, India Arie has finally released new music this week.

Since the 2009 release of her last album, Testimony: Vol. 2, Love & Politics, India has been taken a step back from the spotlight, though she has continued to pop up in one way or another. She was poised to release a new body of work entitled Open Door with Israeli singer Idan Raichel, but the idea seemed to come and pass after the release of their single “Gift of Acceptance” in 2010.

Her 2009 work with Anthony David, “Words”, was Grammy nominated, and she actually won a Grammy in 2011 for Best Pop Vocal Collaboration for her performance on a cover of “Imagine” for Herbie Hancock alongside Pink, Seal, Malian singer Oumou Sangare, and Jeff Beck.

In October of last year she released the single “6th Avenue”, with all proceeds going toward Hurricane Sandy Relief Efforts.

But after her long hiatus, India Arie is putting together a new album titled SongVersation. The lead single “Cocoa Butter” brings back that classic India Arie feel good flavor. She uses cocoa butter as a metaphor for the healing properties of love. And though it doesn’t scream “radio hit”, this one is a grower. The refrain of someone’s love being like “cocoa butter on my heart” sticks in your psyche and brings to mind all of the times that you’ve felt that way about someone in your past.

Stream the single below, and look out for its official release on iTunes!

So what’s your verdict? Are you loving what India is putting out? Reminiscing on her previous releases? Share your feeling in the comment section below!