So, I have been on hiatus for a bit. And, I am sure you have all missed me. But, I have rebuked my hermit-ness to come out and say it. Frankly, I am sick of this rape chit-chat. Rape talk has turned into tradition in this country. You know how women are told about marriage and all the traditional things they have got to do for good luck? “Have something old, something new, something borrowed, and something blue…” Well, when did rape become a ceremonial rite of passage? When did we start conforming to a culture where women are a sub-gender ever vulnerable to the pitfalls of potential rape-dom?

I must say, I am not overly surprised, but I am surprised a bit. In the past few months, women have risen in punching bag status from slipping off to super elite. And I am thoroughly done with it.

Back in 1985, a woman named Jacqueline Goodchilds commented in an article about the recent increase in discussion surrounding rape and rape culture. In discussing her recent study of adolescents ages 14 to 18 regarding forced sex, she commented simply:

“For one, we found that a large percentage of both boys and girls indicated that it was OK to use force at times with sex.”

How many young people thought this? Well, the results of Goodchilds’ 1978 study can be seen in the graphic below. Of those participating, there were never fewer than 36% of male respondents who found certain conditions okay for forced sex with a girl. Thirty-six percent! 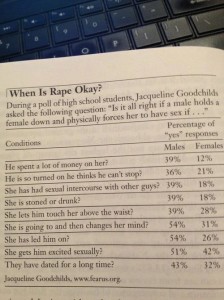 What does that mean? Well, that means that back in the seventies and eighties when this stuff was first being studied and we were undoubtedly a less liberal nation, at least a third of adolescent boys (assuming this was a representative sample) found it ay-okay to force a girl to have sex if the conditions were right…

In two instances, when the girl changes her mind or has “led him on,” force was seen as justified 54% of the time. Because, you know, once you consider having sex with someone, they’ve got a free pass forever.

Several things about this are extremely disturbing. First, all these young male respondents are now in their early to mid-fifties. They have likely raised other young men doing us all the gracious favor of handing down their rape ideology to their naive and impressionable progeny. So, yay. That’s great to think about.

Second, this was over 35 years ago. Back then, before rape became a central theme in pretty much every single horror movie and action flick and before the world-wide web granted us access to every rape on every corner of the Earth, this was rape ideology in this country. So, just imagine where we are now…

Whether you question the methods of the analysis or if the kids were being truthful, the fact still remains that they had the courage to give affirmative responses to scenarios condoning forced sexual intercourse. That should be the main focus of this study.

What’s new is Rapeland? The Steubenville rape case. In the small town of Steubenville, Ohio, two high school football players (Mays and Richmond – pictured right) were found guilty of the rape of a 16-year-old girl who was reportedly unconscious and non-consenting. 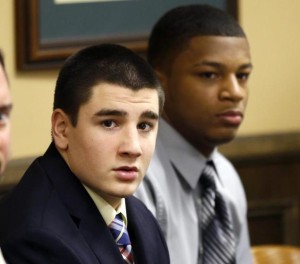 Fellow classmates watched as the girl was literally carried out of a house party – not walking willingly – by the young boys who would later rape her and record it. Some of the students even deemed it appropriate to post video of the ordeal on YouTube. Later, when the students were questioned about that night, many of them replied that the girl was obviously drunk and unaware of what was happening, yet none of them thought to help prevent her rape.

Now, as the mother of an 18-month-old girl, I find this story EXTREMELY disturbing. I would have found it disturbing anyway, but to know that a house full of people thought it okay to let this drunk girl get carried out of a party by two  – not one – but two boys who had the intent to have un-consenting sex with her limp body is truly disgusting. It is vile. It is horrible. And, it is debased.

Some people want to blame the other young girls in the room for not standing up for the victim. They have commented that girls often do not stand together, which I do not disagree with. But, what is more disconcerting is the role social media played in this girl’s victimization. Not only did these young people not stand up for her, call the police, or urge the rapists to stop what they were doing, they became voyeurs, cameramen, and commentators of rape.

This culture not only condones rape, it supports rape and rapists. We tell men that women are asking for it. We over-sexualize young girls for sport. We say that Playboy magazine is actually a good read when you look at the articles (right). We make movies where rape is the side dish for violence and misogyny. And then we are shocked when two young boys rape an unconscious classmate and all her “friends” look on in wonderment? Puhleaze. Get real America. 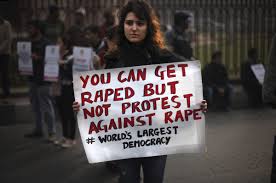 Some will read this and complain that my view is too narrow. They’ll say that rape is not an American problem but a global problem. And, I don’t disagree.

Recent cases of gang rapes in India have gained international attention. A 23 year-old woman who was kidnapped, beaten, and raped after boarding a bus in New Delhi in December later died from her injuries in a Singapore hospital. Reportedly, six men, including the bus driver from the vehicle she boarded, beat her and a male companion she was riding with. They then raped her repeatedly.

Sadly, while this news shocked many worldwide it continues to happen over and over again. And what have we done about it? Absolutely nothing. Not a single press conference. No calls for action.  Nothing. The White House and Congress have been radio silent on an issue which has purportedly “shocked the world.”

Instead of issuing and establishing a new narrative for an epidemic which is rampant not only in the Middle East but across the globe, we have rested on our laurels ignoring the problem as we usually do. Our modus operandi has been to simply call rape “shocking” every time it happens no matter how frequent, copycat, or common it has become. We have set a new tradition wherein we simply pretend not to see it happening all over the world or at home. And, we raise ourselves above countries like India by saying things like, their country has a “rape problem.” All the while, we overlook our own blaring issue with the act. Talk about inhuman.

And what happens when Congress and the White House actually do decide to act in favor of a woman’s right not to have sex with someone she doesn’t want to sleep with? All out stupidity in the form of a political football game. 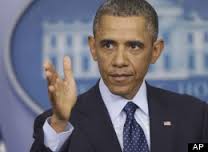 Most recently, the Violence Against Women Act faced harsh movement against its re-authorization because House Republicans have yet to outrightly support ANYTHING with President Obama’s finger prints on it.

What conservatives are calling an “expanded” bill was simply the same ol’ Act with some specific call-outs protecting Native Americans and LGBTQ victims of rape. Instead of making Americans who have been accused of raping Native women impermeable to tribal laws, the law now states that tribal governments have the right to prosecute American-native defendants within the bounds of their own governments. Rough translation: Americans accused of rape will now face the same treatment on native lands that they would anywhere else in the world (sounds like a major injustice right?)

What was the push back from Republicans? Well, they really just didn’t feel comfortable letting folks with feather headdresses and tomahawks prosecute their rapists (obvious sarcasm). Truthfully, native governments are not primal. They don’t bring down judgment when the rain god tells them to. They are normal governments like those found throughout the rest of the known world. And, in some cases, they are much more evolved than many of the governments in the Middle East and Africa.

But what really translated from this push-back? Rape somehow became a conversation. It was a bargaining chip. The Violence Against Women Act, though later signed into law, was on the table with every other conversation in Washington DC like it was unimportant, negligible, and optional (that’s all the Republicans need to turn out those needed women voters out in the next election). But see, they thought about everything. To beat back any political consequences of their actions, they have simply chosen to lie about their support since they can’t muster up the courage to say that they voted AGAINST a bill protecting victims of rape and violence from their accused aggressors.

So, to recap, what are we left with? Lackluster support from the highest legislative body in the country, no acknowledgement that rape is a global epidemic, socialized rape entertainment in the form of teen acceptance and promotion, and the assumption that rape is okay when a chick is asking for it (cause you know, we do that sometimes). These are the traditions of rape ideology now. These are the messages we are passing on and carving in granite. This is it guys.

It is now a world where young men are no longer taught not to be rapists. They are not raised to cherish and value women. Men are not taught to be men anymore. Instead, young girls are force fed preventative methods and measures to protect themselves from what seems almost inevitable. Instead, women are the proverbial sex objects for man’s attainment, enjoyment, and disregard to be used until they’ve had their fill. And, honestly, I just can’t stand it. Can you?

We know this right? We have received the message loud and clear. Now, what the hell are we going to do about it?