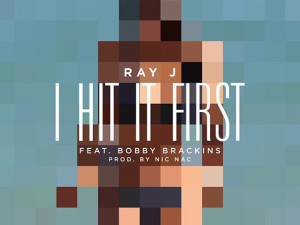 So. I finally listened to Ray J’s new song “I Hit It First“, as promised. And I am feeling a bit conflicted about it. I guess Ray J has the artistic freedom (I use that term VERY freely) to talk about whatever he wants. But just because you can do something doesn’t mean that you should.

On first listen, I knew the song was bad. The beat is just plain cheap. And without even paying attention to the lyrics, I knew they were terrible. However, one could say it is catchy, if for no other reason than the sheer number of times he repeats “I Hit It First.”

And going in, I thought (or maybe just hoped) that the song was about his sexual prowess and conquests, with Kim as just one of the samples. But even with such low expectations, I was wrong. The song is completely and only centered on the fact that he had sex with Kim Kardashian so long ago. Listening to it makes me feel dirty. And as usual, Ray J’s vocal delivery leaves much to be desired.

And how appropriate is it for him to release this while she is pregnant? Yeah she is unwed. Yeah she just got a divorce. Yeah she is pretty much known for capitalizing on whoever she happens to be dating at the time. But at the end of the day, she is bringing a child into this world. Is it too much to ask of Ray J to show an iota of respect (at least for the child)?

In the end, this whole thing just makes me feel bad for Ray J. How desperate do you need to be to assert that you “put her on”, as if that reflects positively on you? He is proclaiming that he was just the first step in her climb to fame. Score one for Ray J. Is this is supposed to be a good career move? I know Brandy tends to let her little brother do whatever he wants to do, but it’s time for big sis to yank the reigns.

When will Ray J come to learn that these “fame at any cost” antics do not lead to a successful career? All he can ever seem to do is muster these 5 minutes of fame moves. Then he disappears again for a year or two. Here’s to hoping he doesn’t come back again.

Listen to the song below, and be on the look out for choice lyrics like:

“Candles lit with that wine, money still on my mind, and I gave her that really bomb sex”

I know after that preview, you just can’t wait to listen, so go ahead and press play.

What do you think? A new low or just an expected low? Fair game? Let us know in the comments!