Fantasia – “Side Effects of You” Album Review 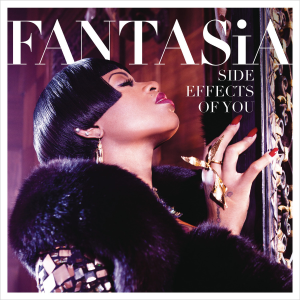 On 4/23, Fantasia released her new album Side Effects of You. And for an artist with a pretty strong body of work already, the deck has actually been stacked against her. With the string of personal problems that she has faced in recent years, many have written her off. But with this new release, Fantasia let’s us all know that she is just getting started.

You know that Fantasia is in a new stage of her career from this opener. As she sings about the amazing, seemingly supernatural love that has her under control.  She shows complete mastery of her voice, the beat is knockin’, and Big K.R.I.T. adds a good dose of grit.

On this subtle women’s anthem, Fantasia let’s you know that it’s okay to let go of a relationship, and falling out of love isn’t that bad. I’m loving the infusion of reggae on this one. It’s just enough to give you the nice ride of a beat, but the R&B laid on top is classic mid-tempo.

One of my immediate personal favorites of the album. Another mid-tempo banger, Fantasia sings, almost dreamily, about  leaving her partner (if only she wasn’t so deeply in love). There is just something about the sweetness of the track and Fantasia’s delivery. She is most known for the strength of her voice, but this song rests entirely in the softer notes. And it is a welcome change.

I have yet to identify who joins her on this interlude, but for a break from the music, this interlude brings a potent mix of humor, honesty, and sangin’.

This is the official second single from the album, and for good reason. The most obvious is the features from Kelly Rowland and Missy Elliot. This song brings attention for that reason alone. Fantasia and her crew remind their men that they wouldn’t be any thing without them. But the execution is what makes this one a winner. Fantasia flirts with her softer tones once again, for surprising results. Kelly holds her own. And Missy delivers a competent verse, even if not her finest.

6. Side Effects of You

As the title track of the album, expectations are always high. And Fantasia delivers with this one. Though not as powerful as “Free Yourself“, “Side Effects of You” makes up for it with a clever premise and upgraded emotional depth that can only be earned through experience. Fantasia poignantly relates a relationship to a medical prescription, highlighting its benefits but also intimating that “Nobody told me the side effects of you.”  Beautifully written and masterfully performed.

This head knocker is stage -ready. I can already see her kicking her shoes off and breaking it down with her band. Complete with its own built-in answer and response section, Fantasia heads back to her funk/rock roots and channels Tina Turner. I dare you not to dance.

Another funky number that doesn’t really grab you straight out of the gate. But it’s a grower. Part of me loves that Fantasia went for it on this one, and just had fun. Blink and you’ll miss it, but by the third play, you’ll be singing along.

How bold do you have to be to sample Whitney Houston? And of all of her songs to sample, “I’m Your Baby Tonight“? That takes a self-assuredness not possessed by many. But once again, Fantasia takes such an innovative approach by adding in a rock element, that you can’t fault her … in fact, you’ve got to give her props. I won’t spoil it for you, just listen to the track yourself.

This is another one of the standouts of the album. She even, surprisingly, raps on two verses. In the wake of her last album, Back To Me, I feel like this song embodies the direction that she was trying to go in. It’s fun, but Fantasia also makes a very strong, simple statement: No matter what comes my way, I’m going to keep shining. Once again, you can feel Fantasia letting go and just “doing her.”

I already did a review of this single (Fantasia Tries to Go From Losing to Winning), but this single does deserve a second highlight. It is a massive sleeper hit. When you first listen, it doesn’t sound like much. You may only catch that it samples The Commodores’ “Nightshift“. But this is one of those songs that gets into your head and you hum to yourself all day.

“End of Me” is reminiscent of Gladys Knight’s “License to Kill” or En Vogue’s “Don’t Let Go“, though I’m pretty sure it is not a sample. It’s all about having that undying love. It’s about having the level of devotion where you will keep giving of yourself, even if it leads to your own demise. But in any case, the sound is so cool and laid back that you can’t help but bob your head.

This song is a little overly sexual for me (especially with the visuals of digging nails into people), but its strength lies in its melodic elements. Sung very “sing-songy”, it actually has a relaxing effect. It’s very pleasing to the ear. And this is one of the instances on this album where Fantasia gets to open up her throat and just let it rip.

I completely understand why these tracks are not included in the standard version. Though great songs, they feel more experimental, as if her team was testing possible sounds for the album.

This song is a made up of cautionary tales about a girl and boy who have been deeply hurt by the world. I’m not fully feeling the chorus; in the midst of a  laid back groove track, the chorus speeds up for some reason and it feels out-of-place. Still, it is very interesting to hear Fantasia’s and Tank’s voices juxtaposed against one another. And I think almost everyone is a sucker for a “church revival” session in a song.

This one starts off feeling like a true anthem. The track has that epic feeling and the momentum builds as you get closer to the chorus. And the chorus itself delivers the crescendo that you expect. Yet, it’s in the vein of any dance track (or remix for that matter), and at the end of the chorus an electronic section plays that is in discord with the rest of the track. I love the musical tributes that Fantasia does, paying homage to Michael Jackson, Whitney Houston, Bob Marley, and Jimi Hendrix for setting examples for the artists that have followed in their footsteps. And the message of looking to the heavens where their souls reside is universal.

The Final Verdict: Fantasia takes us on a ride, brushing off whatever hangups might have held her back before, and letting it all hang out. Filled mainly with mid-tempo numbers, the album manages to show the breadth of Fantasia’s instrument, ranging from the most bombastic of wails to the most delicate tones. Though not perfect, this album embodies an artist coming into their own. Most importantly, Fantasia has recreated herself, and it is clear that what she may produce in the future holds immense promise.