Janelle Monáe Proves That a Brown Girl Can Be a Q.U.E.E.N.

First, of all, I will just begin by saying, brown women everywhere, please stand up. Janelle Monáe released her new video this week for her single featuring Erykah Badu called “Q.U.E.E.N.” The banging single comes from her soon to be released album, “Electric Lady.” And, honestly, after watching this video, I can’t wait.

Monáe’s sexy style and funky beats hearken back to the smooth hip hop hymns we all subscribed to in the 90s and early 2000s. But, aside from the get-up-and-dance centripetal force that no doubt sucks you in, it is her message and overall image that inspires so many.

Though Monáe has been on the scene for a few years, many in the black community were introduced to her when she was awarded last year at the annual Black Girls Rock! awards show. Her moving speech urged young girls to be true to themselves no matter the cost or adversity. And, she hit home for many with the message that she didn’t have to change herself to become a Cover Girl. So, not only is she a great artist; she has made it clear that she is here to change some things in the music industry and art industry in general. 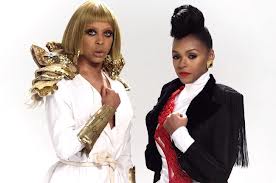 So, the most logical question is simple: why hasn’t this young lady caught on more? She is beautiful, confident, consistent, and talented. One might place her slow burn toward stardom in her deliberate anti-mainstream positioning. Another might blame the fact that she is unwilling to compromise on her signature on-stage props like her pompadour and black & white uniform.

But, I have a different observation. I think that Monáe’s uncompromising and unique nature will be the exact things she needs to stick around for a very long time. No, she hasn’t flashed an asset or worn an overly revealing dress. Are those mistakes? Certainly not. She has illustrated that she is not making music for the money. The final verse of this song proves that she intends to “sell hope” to her fellow “electric ladies.” She is positioned in a niche where no one in the black community has really dared to stand since Lauryn Hill and Erykah Badu. The hope is that this generation will appreciate that intentional positioning a bit more than mine did. Because I, for one, miss the hell out of those Q.U.E.E.N.s.

Finally, I have to underscore her final point in the song. She summed up the entire message by spitting 20 bars of fire. Most importantly, she said this:

“Will you be electric sheep? Electric ladies will you sleep? Or will you preach?”

And, I would say this is a pretty fitting question. I guess I am more of the preaching kind…but, the key here, is practicing it too. And Ms. Monáe has certainly done a stellar job of that.

Are you an “electric lady?” What do you think of the song? And, what do you think Janelle Monáe’s presence in the industry will do for the image of brown girls across this country?