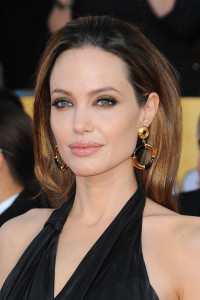 The title of this post might seem a bit melodramatic. But, I am okay with that being that my natural state is melodrama and I am pregnant. So, whatever. But, as someone who watched my mother toil with breast cancer for many years and who is now considered high risk herself, this narrative of Angelina Jolie somehow being a hero for publicizing her decision to have a preventative double mastectomy bothers me for several reasons.

First, Angelina Jolie is a mega-millionaire. The test to see if a woman possesses the BRCA-1/BRCA-2 genes is currently patented. This means that normal people, like me or my mother, would have to shell out at least $3000 to get the same testing Jolie had. This is highly unrealistic given the fact that this country is still embroiled in a debate over semi-universal healthcare. If we can’t figure out how to ensure the poorest and neediest, how could we possibly figure out how to make these types of preventative measures affordable to women nationwide?

Second, the medical research company, Myriad Genetics, who holds the patent on this gene is currently in litigation at the United States Supreme Court level over whether or not research companies should be able to hold patents on these types of genetic advances at all.

Third, “healthcare” companies have made it crystal clear that the “care” part of their name means absolutely nothing to them. If they cared, we wouldn’t see cases where mothers, fathers, and children are denied life-saving health services due to lack of coverage. And, we definitely would not see people dying on hospital room floors if these companies cared about the recipients of their services.

Overall, I am grateful that Jolie shared her story with the larger nation because those at risk, especially in the Black community, could really benefit from increased knowledge and awareness about a disease which claims so many lives each year. But, this disease is already one which strikes fear into the hearts of many. Some have criticized that Jolie’s extreme decision is not a common one. And while Jolie’s story seemed to be well-intentioned, it could have the counter-effect of sending women with much lower risk of breast cancer into a frenzy when faced with this type of decision.

But, Jolie could and should do more within her power to advocate for these types of preventative health services on a nationwide scale. She could start a nonprofit funding these types of tests. She could lobby Congress to expand healthcare to women in need.

In many ways, this reminds me of Hollywood’s efforts to thwart gun violence. The “Demand a Plan” video, though riveting, did little to sway congressional Republicans from slapping down any efforts to tighten gun security in the country. And now, I truly believe Angelina Jolie’s story will face much the same fate. Folks will appreciate it. But, with no follow-through, with no gusto, with no courage to actually do something, it just won’t mean much of anything.

Beyoncé once claimed herself to be a southern girl from humble beginnings, and now she is marketing sugary beverages to her “bey-phytes” or “bey-hives” or whatever they are called. Mary J. Blige remixes her songs to sell Whoppers. I mean really people. Stop selling out and fight for something.

I don’t mean to be negative. Maybe it is the pregnancy talking and adding the snark to this take. But, in all honesty, when are we going to demand more of the political and pop culture figures who feed us information yet have no audacity to make any changes? At some point, we have got to go back to being a nation of doers not talkers. And that goes for all of us.