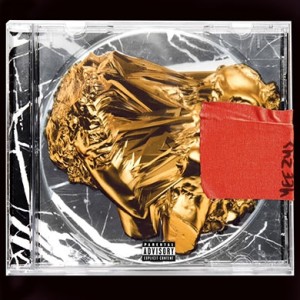 Kanye West’s God complex is showing no signs of stopping. Kim Kardashian confirmed for the world that his next album is titled Yeezus, and if Kanye’s tweets can be trusted, the arrival date is June 18th. I have no idea what that album cover is supposed to mean, but who ever understands Kanye’s “art”?

And we all know that Kanye West does not get along well with the word subtlety. To premiere his new single, “New Slaves”, he had it projected on walls in 66 cities across the world. I would LOOOVE to see his marketing budget. Something tells me he could use it to feed a small nation.

But it doesn’t stop there (does it ever?). Kanye also took to the SNL stage last week to give live performances of the aforementioned “New Slaves” and another song, “Black Skinhead”. To me, the song titles sound like clear cries for attention, but to each its own. And while I know that Yeezy has a flair for production, the performance for “New Slaves” had me worried that hidden messages to accept Kim’s forthcoming child as a new Messiah were being blasted into my brain.

After forcing myself to listen to the song a few times, I’m getting that Kanye West is proclaiming celebrities to be the new slaves. I don’t know how this is supposed to appeal to a wide audience, but as I referenced earlier, Kanye seems to believe that he is God and can do anything he wants. I would include some of the lyrics in this post, but he curses almost every other line and, by my count, says the n-word no less than 10 times.

The second song, “Black Skinhead”, continues Kanye’s anti-establishment and anti-racism march. I literally cannot understand why believes he is the best candidate to fill those shoes, but if Lupe Fiasco can do it, why not Kanye?

After all of the outrageous steps that Kanye has made in his career, I think it is interesting that he is on this “new slaves” train. He is the main one wildin’ out with designer clothes and high-end cars. As a high-profile Black man, he is in a position to be seen as a representative of the whole. And while his words may send one message, his personal life clearly is saying something else.

How do these songs make you feel? Are you a Kanye supporter or a Kanye hater? Do you understand what that album cover means? Share your thoughts in the comments section below!