Miguel just can’t seem to catch a break. The “Adorn” singer seemed to be riding on a high with the success of his latest album, Kaleidoscope Dream (check out our highlight if his work: The Music You Should Be Listening To: Miguel). He had seemingly crossed over from R&B music into Pop. But then he took steps to undermine his years of work.

First there was the 2013 Billboard Music Awards. He performance of his hit song “Adorn” was going well. He commanded the stage well and his vocals were holding up. Then he decided, reportedly against producer orders, to attempt a jump over the crowd. In a moment that has gone down in infamy, he came up a bit short, kicking/drop-kicking two women in the audience.

While Miguel initially continued his performance, playing off his mistake like a professional, he has tried show appropriate concern since. Still, one of the women, Khyati Shah, is claiming that she may have sustained brain damage and is planning on suing. Doesn’t look like that one will be dying down anytime soon.

In what couldn’t be any better timing, Mariah Carey then released her new single, “#Beautiful” featuring Miguel. And just like that, Miguel was on an upswing again. The music video premiered on an airing of American Idol, and the single quickly shot up to #1. Of course performances in support of the single would follow. However, Miguel seems to be a jinx as of late.

As Mariah Carey was interviewed prior to a performance on Good Morning America, her dress popped in the back, requiring her to change her outfit during the commercial break. Then, as Miguel was being introduced to the stage, Mariah realizes that he was supposed to be introduced for the performance and used an expletive … on live TV. 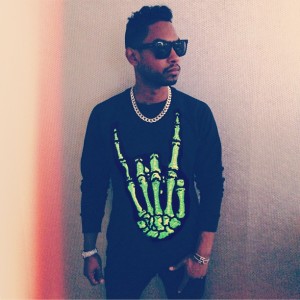 And most recently, Miguel decided to release some of his pent-up anger on Twitter.A slew of celebrities have already proven this to be a terrible idea, but their tales weren’t cautionary enough. He received some negative comments about a picture that he posted on Instagram, and his response turned racial. No way making racial comments wouldn’t cause any controversy {SARCASM}. And you think he’d try to shy away from the spotlight after recent events.

“Im proud of my heritage but honestly, black people are the most judgmental people in the world. Shits sad man.”

“we’ve been conditioned, pre-programmed to hate ourselves”

Then he tried to clean it up.

“the problem can not be fixed until the problem is recognized. Not everyone is the same thank goodness. And obviously, I love all my fans”

“Of course EVERYONE is judgemental. I just PERSONALLY believe WE are the most critical of our own”

But it was already too late for that. It went viral. Another PR nightmare. I imagine that his publicist, whoever he or she is, is going insane with all of the fires that need to be put out. His best attempt can be seen in the video below, where he sat down BBC Radio 1Xtra host Charlie Sloth.

Notice how he never apologizes to anyone that might have been offended? Maybe that freestyle song will serve as his mea culpa. Still, you have to give the man some credit for sticking to his guns, right?

I don’t know. They say that bad things happen in threes, so hopefully Miguel is out of the woods now. But who knows how long it will take for all of this to blow over? And who knows if these occurrences will follow his career in the future. The one thing that I do know is Miguel needs someone to rein him in (PR training wouldn’t hurt either).