Being a Black Father

I am a Black father. I have two children, a 5-year old son and a 21 month old daughter, and we are expecting our third. I work a 40-50 hour job. I am a member in good standing of a church. And with every passing moment, I am working to break the stereotype that Black fathers are absent. 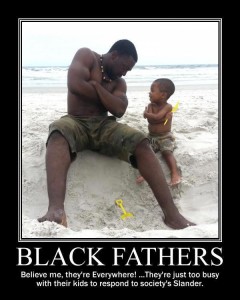 If you looked at the news or took a sample of how Black males are portrayed on TV and film, you’d think I wasn’t real. I give my children a bath every night. I drop them off at school in the mornings. I hug and kiss them daily. I sing and rock my daughter to sleep, and I read a bedtime story to my son every night. I do these things out of love. I do them because I should. I do them because it’s my duty as a father.

But for some reason, people don’t think I exist. They think that this duty and this sentiment is missing in the Black community.

And to some extent, they are right.

Many Black children grow up with absent or rarely present fathers. According to 2011 U.S. Census Bureau data, nearly 2 in 3 (64%) African American children live in father-absent homes. And I was one of those kids. I’ve never lived with my father. I didn’t (and still don’t) know him very well. And while I did know that he loved me, it wasn’t something that I felt very often. As a result, I was left to figure out what being a man was between lessons from my mother, sitcom families on TV, and pure trial and error. And I am still working on shaping exactly what being a man means. To this day, I am not sure that I’ll ever fully grasp it, and I feel like I have been cheated in this regard. My only hope is that I am able to be an example to my own son so that he will not have that struggle.

I don’t want this piece to be  sob story. I really don’t. But being a Black father is tough. We don’t get a lot of credit, at least until someone dumps undue amounts of praise on us all at once. And it feels great to be recognized, but not to the point where the efforts of other Black fathers are marginalized. And when you are with your kids, you can see the questions running through people’s minds: “Is he married?”, “Are those his kids?”, “Does he have any clue what he is doing?” And there is that little issue of balancing discipline while in public; I can’t go too easy on the kids because then I am a poor parent, and if I show too much aggression, someone might call the authorities.

Compound all of that with the normal obstacles parents face. Then compound that with all you face as a black parent. Put all of it together and you’ve got a very thin, near invisible line to walk.

MSNBC Anchor Touré talked about this phenomenon just this past Monday. It’s called “Proper Negro Fatigue“. Whether deserved or not, prejudice and perception are things that we face everyday. And while we cope with them in the ways we deem best to make our lives livable, it’s immensely difficult to know that your children will have to face the same things as they grow up. And in a world with cases like Trayvon Martin‘s and Tremaine McMillian‘s, you feel terrible having to teach your children the same coping mechanisms that you’ve learned, knowing that even that may all be for naught.

I’ve enrolled my children in private school to get them the best education, but it is hard to know that the faces they see everyday don’t look like their own and are far from a melting pot. They will face some of the same racial issues I did as a child. I was that one black kid. My skin was different. My hair was different. I couldn’t blend in if I wanted to. And now I’ve put my own kids in the same position.

Still, I am a father, and my children are my responsibility. When they look up at me, searching for guidance and reassurance, that responsibility is never more evident. So in the face of all of these circumstances, I live for my children.

And my numbers are growing.

Fatherhood and the increasing part that fathers are playing in family life have received heavy press as of late. Black fathers are making their presence known, doing their best to buck the stereotypes that weigh so heavily on us. Sociologists like Roberta L. Coles have written about the different forms fatherhood may take in the African-American community and how different doesn’t mean wrong (The Myth of the Missing Black Father). Entrepreneur William K. Middlebrooks works to advertise the positive achievements of Black fathers that are so often overlooked.

All of this is to say that Black fatherhood is evolving. We need to stop simplifying Black fatherhood down to jobless, absent, babymakers. This Father’s Day, let’s shift our idea of what a Black father is. Are many absent? Yes. And while that number may be declining, it is still something that needs to be addressed. However, there is always another side of the statistic.

Black fathers are real. We pack school lunches, cook gourmet family meals, and change diapers. We discipline our kids, bandage their scrapes, and wipe their tears. We teach them to ride bikes, give piggyback rides, and share afternoon tea.

And we don’t expect special treatment for doing a job that we signed ourselves up for. All we expect is to be treated with the same respect as any other upstanding father on the planet.

Are you a Black father doing his best for his kids? Has a Black father or father figure played a special role in your life? Share your stories in the comments section below!