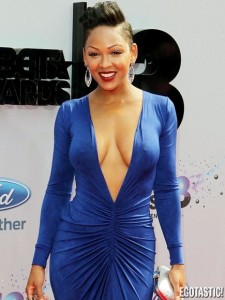 If you could see me right now, you would see me slowly shaking my head at all the hypocrites out there criticizing 31-year-old stunning actress Meagan Good for her dazzling blue dress she donned this past Sunday at the 2013 BET Awards.

Good sported a Michael Corsello creation with a deep cut v-shaped neckline which revealed most of her cleavage almost down to her navel. The neckline was accompanied by a very high split showcasing her winning legs. Now, in all truth, most women would have absolutely no business in the dress. But, folks have been admonishing Good not because of the way she looked (because she clearly wore it well), but, instead, they are flouting her attire as un-Christian. Seems a bit asinine, no?

Here is some background on these concerns. Last year, Good married film producer and Seventh Day Adventist preacher DeVon Franklin. And, while I will admit that presenting the Best Gospel Artist award in that particular gown was racy, I am still not understanding the public outcry from the Christian community. Twitter erupted and Facebook crooned as Good took the stage. Everyone simultaneously clutched their pearls and “Hallelujah” church scarves. All the women shrieked “Ahhh boobies!” While all the men murmured “Ahhh boobies…”

Here we are, days later, still talking about the Deception and Think Like a Man star’s physique instead of something more productive like President Obama’s recent trip to Africa or the upheaval in Egypt. Nope, we are wasting our time talking about two things Americans seemed consistently distracted by…breasts.

Good was so taken aback by her critics that she had to respond via Instagram.

“…I don’t feel convicted about this at all. my spirit is saddened that our people only know one way to think and process things..

I’m not any less holy because the dress I wore -I may not be who people think I should be -but I’m morphing into exactly who God wants me to be.. My excuse is never “I’m going to do me” and I don’t feel that I need to make an excuse or defend or what I wore .. I know I have a responsibility -and I’m working daily to fulfill the full potential of all God has created me to be..

A dialogue was started about my character, integrity, my walk with God and my Husband -simply based on a dress that I wore.., Of course I’m going to have a reaction to people saying negative things… It’s just sad..

Makes me sad not regretful.. My heart and spirit is always open to whatever my Father would want to share with me… And my spirit tells me to be exactly who I authentically am -because that’s what’s going to reach who I was authentically designed to touch.. people like me who are often misunderstood and told their cut of God’s promise -because they don’t look the role …when God doesn’t care about us “looking the role”..he has always cared about bringing us in -and us being whatever we need to be to bring Those left out in ..

And it just makes me sad that us as Christians can’t see beyond our initial reaction and don’t seek God before they attack other brothers and sisters …and never think for one moment that: God knows what he’s doing and he uses everything for his glory .. and he has a plan for every specific situation.. I [didn’t have] intentions on anything .. Merely picked a dress I saw and loved … God knows my heart and that I didn’t do anything wrong .. And he will use even people’s thoughts to bring him glory.” 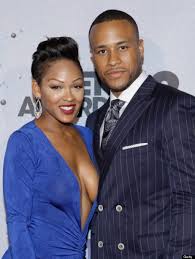 What folks fail to acknowledge is that her husband was standing right alongside her that night. They obviously were on one accord when it came to her wardrobe. And, last I checked, clothing was not a necessary prerequisite to ungodliness nor is conservative attire needed to make the model Christian, just saying.

What I will say is this, Meagan Good looked amazeballs. I wanted to cover my husbands eyes but that was my problem, not hers. She is an actress who has ALWAYS been sexy. She was sexy before she got married and I assume she will stay that way as long as she can muster it. There was no cursing, twerking, booty-popping, or whorishness in her behavior and, to me, that is more indicative of someone’s character than a few drapes of cloth.

This reminds me of Janet Jackson’s transformation, a true catharsis really. Recently, she married a zillionaire named Wissam al-Mana and reportedly converted to Islam. She has been photographed wearing a hijab covering her head and more traditional conservative clothing. Now, we all remember Janet’s infamous wardrobe malfunction. And I feel like I have had a close and intimate relationship with Janet since she roamed around a mansion naked in “Every Time.” But, now, she puts on a head covering and baggy clothes and that makes her wholesome? Puhlease. Her perky pierced boobies still exist my friends.

Is that what stars are supposed to do? Should Meagan Good start wearing church hats and knee-length skirts now that she’s a married lady? I think not. Trying to minimize her attractiveness for your own comfort won’t make her any less hot. And, sadly, covering her cleavage won’t make her any more or less sanctified and holy.

So, all you women (and men) out there offended by Meagan Good’s breasts, next time, just turn the show off. Better yet, get a hobby. Read a book. Perhaps the Bible. Because if you were looking at the BET Awards for some type of sanctimonious gratification, you are obviously confuzzled. Get yo’ life hunties and get out of Meagan’s closet.