Geek or Nerd or Glerd: Do You Know the Difference? 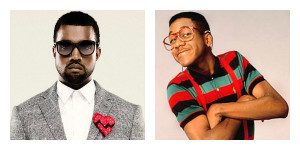 Today is Embrace Your Geekness Day. And, while folks usually have an idea of what a “geek” is, they often confuse it with the acceptable definition for a “nerd.” Because of this inherent confusion, I felt the need to clear the murk up a bit.

Long ago, nerds and geeks co-habitated. We huddled up in comic book stores, electronics departments, and math classes like peas and carrots. But now, with the advent of blogging, networked communities, and a new nerdy-cool-hipster trend, we have begun to break away from one another in an effort to better define our cohort. Honestly, the effort couldn’t have come sooner. And, spoiler here, there is a lot more to being a geek or a nerd than wearing glasses.

In the featured image, I juxtaposed Kanye West, well-known rapper and college drop out, and Steve Urkel, the beloved pioneer of all-things-nerd from the hit show Family Matters. Kanye is a geek. Why? Well, because he just isn’t that smart. Sure, some may deem him a musical genius and there have been plenty of nerds who have dropped out of college (Bill Gates and Mark Zuckerberg are great examples), but Kanye West can barely put together a coherent sentence. Also, he has never indicated a knowledge of anything outside of his own self-righteous Jesus complex. Urkel, on the other hand, knew just about everything about just about anything. He had mastered rocket dynamics and magnetism by the tender age of twelve. Not only that, he built a machine capable of making him the oh-so-smooth Stefon. Could Kanye West ever do that? Likely not. 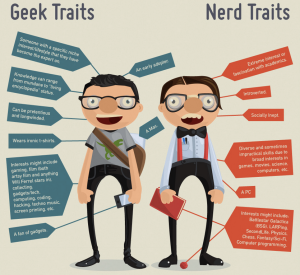 Mashable posted an image expounding on this difference a few weeks ago. In essence, they described geeks as Apple product lovers addicted to gadgets and technology. They noted geeks’ aptitude for pretense and specificity. But, the key thing they alluded to was that geeks typically have a limited purview when it comes to something nerdy. For example, a politics geek might know a ton about politics but little about research methods used in analyzing political data. Or, a comic geek might know the chronological history of every comic ever written, but they might have no idea about the scientific facts used to create the tales they find so enthralling. Geeks, though “cooler” than nerds, tend to geek out on something or several things, but the depth of knowledge is just shallow enough to keep them steering clear of actual politics research, math and thermodynamics study, and icky technical stuff like computer science.

In contrast, nerds occupy a much more dynamic space. In additional to their learned spoken language, they might pick up a few programming languages over time just to be prepared whenever they need to build a website or database. And, while the image makes all nerds look like pocket protector wearing bookworms with little social ability, most nerds operate amongst other humans just fine. Nerds tend to have an addiction to academia, going for another degree simply because they can or opting to dig through a motherboard in their free time as opposed to sitting at a bar looking cool. Nerds know a lot more than geeks. Dealing with people may not always be a strong suit for this group, but that is certainly changing. Nerds for the most part lean toward hard sciences like engineering and chemistry. There is a low likelihood that they care much about dance or other free-form art. But, this isn’ t necessarily a disability. Instead, it is a preference.

Can You Be Both?

The two are not mutually exclusive. One person might be a bit of both. I am a nerdy numbers person. But, I geek out on politics. Perhaps once I complete my PhD I will be a politics nerd but, for now, until I have more knowledge, I am just a geek. I love comic books but haven’t picked one up in a decade. So, I probably fall into the geek category on that one too. But, give me a research question and I can fit a linear regression model in five minutes flat. I am a geeky, black nerd (blerd). I, therefore, deem myself a “glerd.” Yes, I just made that up. Deal with it.

The truth is, neither a geek nor nerd title is cooler than the other no matter what the brilliant minds over at Mashable think. Increasingly, geek and nerd posers are muddying up the smart waters for all of us practicing geeks, nerds, and glerds. Nerds will eventually take over the universe, or at least our creations will. Geeks will have to put down their Apple products and learn a thing or two if they are ever going to catch up. I’d like to think a geek is just a nerd in training.

But, no matter how one identifies him or herself, we are elitist hipsters trying to pull wool over the eyes of simpletons everywhere. Embrace it fellow nerds and geeks. Today is our day.