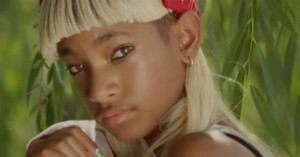 I have no idea what Willow Smith is doing anymore. The talented second child of Will Smith and Jada Pinkett Smith has had the longest “successful” music career without releasing an album. And now, if you didn’t know, Willow Smith, 12, is one half of the musical duo “Chaotic Melodic” along with DJ MVSIC Fabrega. She went from the childlike act of whipping her hair back and forth to, now, producing some HIGHLY mature music.

Her first official release as part of the duo is titled “Summer Fling.” The song centers around the notion of summer flings; you know, when you “hook up” with someone for the summer but move on along with the seasons. The actor playing her beau in the video looks substantially older than her, which is a bit unnerving. And, her new look is a bit discombobulating. She has gone from her normal dark brown hue to a platinum blonde. It’s shaved on the sides, long on the top, and shaped in a short/long quasi-bowl cut. So, yeah, different.

There is pooltime and bonfire antics aplenty. Some have expressed concerns about whether or not couplings in the video are heterosexual, homosexual, or both. Given her nascent age, it seems these issues mainly stem from her adolescence than anything else. Unsurprisingly, Jaden Smith makes an obligatory cameo. And they all dance around in a circle while waving an American flag. If that wasn’t enough, Willow launches into an English accent, a la Nicki Minaj, at multiple points in the video.

Yes, the video is weird. But at least the song is instantly catchy. Still, something about it just doesn’t sit right with me.

Truthfully, I admire the boldness with which the Smiths parent their children. Jaden and Willow at least appear to be very well adjusted and not interested in emulating anything else. Will and Jada give their children tons of space to do as they please. But I have to question their approval of this video. I could see this being released by a 16 year old, but Willow is 12. Is this really appropriate?

Willow is no doubt very emotionally mature for her age. I distinctly remember an interview that she participated in with her mother and grandmother and being taken aback by the complexity of her responses. Her insight and understanding of her own emotions and the causes of them was astounding. But the job of a parent is never done. You gauge your child’s needs and act accordingly, but you always guide.

Honestly, I think the Smiths kind of leave their kids in the wind to take responsibility for their actions. And that just seems irresponsible when their actions are happening on the grand stage. Their choices and mistakes are being cataloged publicly, and there is no dealing with these issues privately. I wonder how that affects a child and what that looks like as the transition into adulthood is made.

But this post is about a video. It is shot well, and I think it is a good musical choice for the duo. Possibly most important, it’s getting loads of press with little to no effort on their part. Any way you look at that, it looks like a win. I would just question Willow’s voice and longevity with songs and messages like these. How will her tween audience respond? And, will the teenagers the song seems to target find her presentation of a summer fling legitimate? Authentic? That remains to be seen. For now, check out the video below to draw your own conclusions.

So what do you think about the video? We want to hear your reactions in the comments section below!