The legacy of Vanilla Ice carries on.

On August 15th, Robin Thicke (along with Pharrell Williams and T.I.) filed suit against Marvin Gaye’s Family and Bridgeport Music. Wait … why is Robin Thicke suing anybody? Well, this is a preemptive suit. Everybody has been saying how similar “Blurred Lines” is to “Got To Give It Up”, and Robin Thicke alleges that the Gaye family has threatened him over that similarity. So what do you do? You sue! 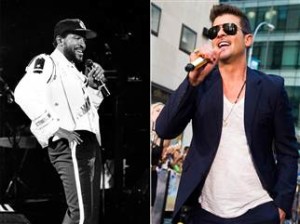 I’ll admit that the Bridgeport music portion of the lawsuit, which covers Funkadelic’s musical legacy, is on target. Any belief that “Blurred Lines” samples anything from Funkadelic’s “Sexy Ways” is ludicrous. However, this has to be one of the most despicable things I have heard coming out of the music world in a long time. Like I noted in my post Timberlake and Thicke: The New Face of R&B and Soul?, Robin Thicke has used Marvin Gaye’s music heavily in his past. Plus, Thicke gave an interview to GQ back in May where he makes it plain that “Got To Give It Up” was his clear inspiration for the song:

Robin Thicke: Pharrell and I were in the studio and I told him that one of my favorite songs of all time was Marvin Gaye’s “Got to Give It Up.” I was like, “Damn, we should make something like that, something with that groove.” Then he started playing a little something and we literally wrote the song in about a half hour and recorded it. The whole thing was done in a couple hours—normally, those are the best ones. Him and I would go back and forth where I’d sing a line and he’d be like, “Hey, hey, hey!” We started acting like we were two old men on a porch hollering at girls like, “Hey, where you going, girl? Come over here!” That’s why, in the video, we’re doing all these old men dances. It was great.

So he admits it. To now try to not pay royalties for a song that he admits was the inspiration for “Blurred Lines” is disgusting. But don’t take my word for it. Just listen to the two songs mashed up and tell me that Thicke didn’t sample:

But it gets worse once you read the content of the lawsuit itself (courtesy of The Hollywood Reporter) Here are some nuggets:

“Plaintiffs, who have the utmost respect for and admiration of Marvin Gaye, Funkadelic and their musical legacies, reluctantly file this action in the face of multiple adverse claims from alleged successors in interest to those artists. Defendants continue to insist that plaintiffs’ massively successful composition, ‘Blurred Lines,’ copies ‘their’ compositions.”

“Gaye defendants are claiming ownership of an entire genre, as opposed to a specific work.”

All at once they pat themselves on the back for the success of “Blurred Lines” and throw shade on the entire Marvin Gaye family. Talk about disrespect.

And for Thicke et al, they say their claim hangs on their belief that “being reminiscent of a ‘sound’ is not copyright infringement. The intent in producing ‘Blurred Lines’ was to evoke an era.” Yes evoking the era by using the same instruments , meter, and sounds in a way to sound just like one of the most popular songs from the era.

Truthfully, this whole thing is just way too reminiscent of the Vanilla Ice sampling kerfuffle where to pulled directly from Queen’s “Under Pressure”.

And we all know how that went. (See there’s that little bitty ting. It’s not the same.)

At the end of the day, this boils down to respect. If you are going to blatantly pull from an artist’s work, have the respect to pay for it. Artists don’t create just so some one else can slightly tweak their hard work in order to capitalize on their efforts. And for people who claim to have the “utmost respect” for Marvin Gaye and his musical legacy, have the decency to choose respect over dividends.