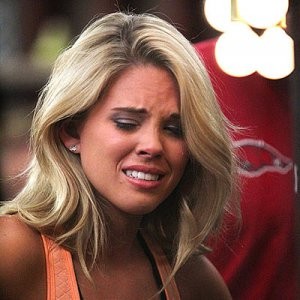 On last night’s episode of Big Brother 15, Aaryn Gries, 22, was evicted from the Big Brother house. Since my last post on the season, I had to stop watching the show. But, I will admit, I was elated when I heard that this season’s villain was voted out unanimously. The best part about it all was everything that unfolded when host, Julie Chen, questioned her directly about her use of racial and homophobic slurs and epithets in the house. Chen’s slick maneuvers: well-played. The audiences’ reception of Gries: hilarious. Gries’ reaction to finding out that racist remarks come off as racist: priceless.

Question 1: Since when is being from Texas automatically seen as a tick-mark in the racist column?

Throughout the season, Gries has maintained her innocence in this whole “racist” thing. She has blamed her beauty, talent, competitiveness, and popularity for what she perceives as targeting from other folks in the house. But, perhaps the most depressing attribute of her ongoing inability to grapple the reality that she is racist is that she thinks it’s because people are stereotyping her… She so eloquently explained to Chen that “In Texas, we say things…sometimes we joke and we don’t mean it.”

You know, sometimes you tell your Asian American friend to “go make some rice” and you really don’t want any rice, you know? You just want to relate and stuff…right?

Or, you know, sometimes you tell your black friend to turn off the lights so you don’t have to see her anymore and it’s just a joke, you know? You still want to see her ‘cause you love her to death and stuff…right?

This girl is ridiculous. Either she is just that simple-minded or she is brainwashed. I have no clue which it is. Under no circumstance is it nice or funny to make fun of someone’s ethnicity, race, sexual orientation, gender, etc. when THEY ARE NOT LAUGHING. I could understand where she was coming from if these were her actual friends. But, when the slurs are accompanied by bed-flipping, confrontations, name-calling, and other innuendo, you just can’t glaze over it all nice-like.

Question 2: How does someone’s own remarks hurt them that they said it?

Gries told Chen this when asked if she could see why people might take her words as racist.

“That hurts me that I would say something like that.”

Now, what in the world does that mean? My words don’t hurt me. I am not sure words even work that way. Words come out of our mouths to, for, or towards someone else. So, can’t they only hurt others if anyone at all? The audience literally laughed at her as she uttered these words with her cute little eyebrows all furrowed and confuzzled. She doesn’t even seem to understand herself.

Gries never once went to Candice Stewart, 29, to console her when she cried after Gries flipped her bed and called her names (this is someone she is apparently “great friends” with). She never asked anyone in the house if her words were offensive. She used them as weapons to hurt other people. There really are no ways around that one. And, for a few weeks, she profited from the fact that no one in the house had the guts to say something about it. Luckily, her run is over.

Question 3: How are your racist actions someone else’s fault because of how “things are being seen”?

In a lot of situations, people can hide behind the fact that “they didn’t mean it that way,” or in the reality TV world, “they were edited that way.” But in Gries’ situation, that is not the case. As Julie Chen pointed out:

“Everyone in the house goes in knowing that everything they say and everything they do will be broadcast live on the internet … You are in a unique spot because when this is all over you’re gonna get to go home and watch a whole lot of footage of yourself living for 70 days. After you watch this footage, I hope and I think you might have a new perspective on things.”

I really am over this whole I’m-not-racist-because-I-don’t-mean-to-be act from folks who continue to push, provide, and perpetuate racist ideals. Racism DOES NOT have to be voluntary. Sometimes, it is learned. Sometimes, we are socialized to do and say mean or disrespectful things. It doesn’t mean we meant to hurt people – though most times we do when we are being intentionally mean – but it does mean that we are hurting people nonetheless.

I really couldn’t care less who wins the show or stays on or goes home or whatever. But, I am intensely satisfied that this young lady was called to the fore on her disgusting behavior. It was about stinking time.

How do you feel about Aaryn Gries and the racist theme that has dominated the house? Discuss in the comments section below!