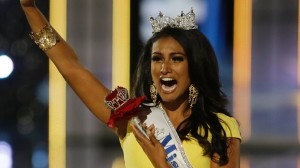 Do you know what a WASP is? It refers to someone who is white, Anglo-Saxon Protestant (aka white people). Do you know what it isn’t? Brown, black, yellow, or red people (aka everyone else).

Last night, the 2014 Miss America Pageant occurred. As such, a beautiful young lady was crowned. This young lady, Nina Davuluri, just so happens to be Indian American. You know, like from India.

In fact, she is the first Indian American to ever win the title. What does that mean? It means that her family’s origins can be traced back to India. She is an American citizen but she just so happens to have a diverse background when compared to many previous Miss America winners. She was born in New York and has lived in plenty of “American” cities . But, she is certainly brown, in other words, not white.

Now, while this is not shocking to other non-whites and non-racists, some folks really have a hard time digesting how a brown person can be named “Miss America.” I mean, we’re all white, right?

It saddens me that my fellow Americans are so ignorant. It really does. But, these sentiments are real. After Davuluri was crowned, Twitter imploded as flabbergasted racists could not even fathom what possessed pageant judges to award this gorgeous lady with an American crown. To these simpletons, Indian American is synonymous with ties to Al-Qaeda, Arab uprisings, and the 9-11 tragedy. How could she be allowed to win the Miss America pageant? You know because Indian Americans are all the same as Osama bin Laden, right?

Let’s take a quick roll call of the slurs and insults. (These tweets have been adjusted as they keep disappearing throughout the day)

She was called an Arab (whatever that means). 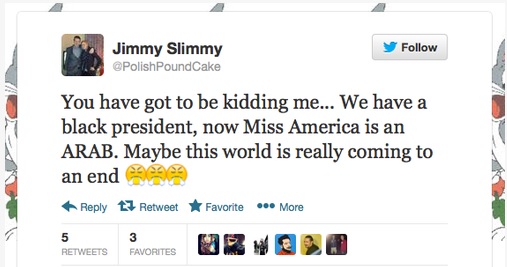 She was linked to terrorism. 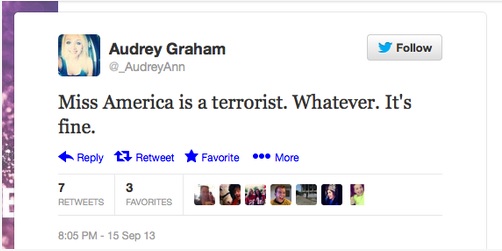 She was called a Muslim (like that’s an insult). 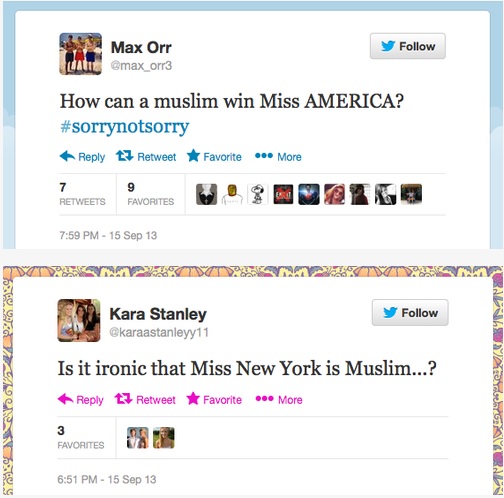 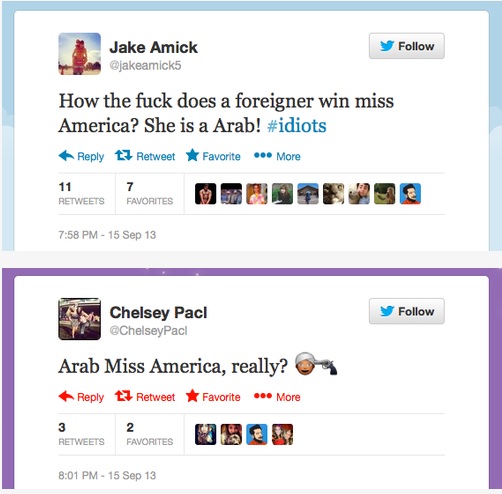 The subtlety in that last tweet is in the turban wearing emoji with the gun to his head, brilliance I tellya. And check out all the retweets of that hatred. Racists have friends ya’ll.

What is perhaps the oddest part of this entire ordeal is that these folks’ concerns were about how “un-American” her winning was. Somehow, having a brown person whose genetic lineage doesn’t hail from some WASP-y country like Sweden, Germany, England, etc. means that she is somehow unworthy of the crown. So, basically, only Sarah Palin is allowed to win Miss America.

Not only that, if her lineage comes from anywhere near the Middle East, she is automatically a slap in the face for all the “real” Americans like poor Miss Kansas. 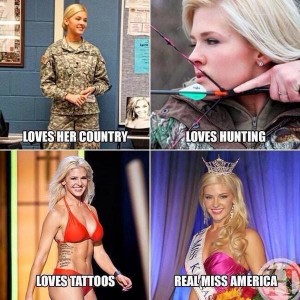 Sad how this poor white woman was robbed of her rightful honor of Miss America ’cause she shoots guns and arrows, wears tattoos, and hunts and stuff. Duh, she is so much more American than Davuluri, right? I actually had no idea what this pageant was about until the Racist Twitter Mafia emerged from hiding to alert me.

When I first saw the uproar, I wasn’t surprised. It is to be expected. We are consistent about this stuff you know. Stereotyping and racial profiling others is kind of our thing. We especially love to do it to brown and black people. Yet, these racists present such a conundrum as to stereotype themselves, a relatively new concept in the racial animus stratosphere. And, their idiocy takes on so many multitudinous dimensions, they are almost innumerable to count. They are saying that someone without guns, blonde hair, pale skin, and/or other traditionally white features is undeserving of our namesake.

In a sense, these folks are defining “American-ness” by excluding people from one of the most populace regions in the world. And, in the same breath, they have made it clear that anyone from this area is not only unwelcome in the American social ideal, they are also a threat to American culture itself.

This ordeal is simply a case study of when ignorance meets the Twitter-verse. First a black POTUS and now an Indian American Miss America, they likely feel their very existence slipping away from them. Both dumb and angry, these folks prove that post-racialism is a far off notion that we’ve obviously got to work a lot harder to achieve.