People are going too far (again) over these iPhones.

Apple’s new iPhone models, the 5S and 5C, were released worldwide this Friday. And as usual, this led to people losing their ever-loving minds.

Just look at one Apple Store in Pasadena. At least 200 people waited outside the store (some for days) all so that they could get a new iPhone. And in anticipation for the release, the store hired 2 police officers to police the crowd. The fact that people waited outside for days simply for a phone showed that this symbol of order was necessary. But that’s when the foolery began.

Two people have already been arrested for fighting while in line for a new iPhone. George Westbrook, 23, of Compton, and Lamar Mitchell, 43, of Pasadena were arrested by the Pasadena Police Department for fighting in public. It’s understandable that you might get testy waiting out in the cold for a phone. Who knows how long they waited. But if it is really that important, why ruin it by getting in a fight? Now there is the chance of incurring a misdemeanor and there isn’t even an iPhone to show for it.

In Houston, TX, two gunman had the brilliant idea to rob those waiting in line outside of an Apple Store. Around 5 A.M., patrons claim that the gunmen approached them and started making demands. When it was all said in done, they made off with several iPhones, an iPad, and a wallet. But don’t feel too bad for them. Once AT&T heard about the incident, they promised to give them credit for their stolen items.

This just shows how stupid this process is. They are lucky the two gunmen were only looking to steal a few phones.

This one truly takes the cake. We head back to the same Apple Store in Pasadena, CA where one truly enterprising and despicable man had the bright idea to hire 70-80 homeless people, load them into vans, and pay them to stand in line for him at the store. See, each person in line can only get 2 vouchers for iPhones. So this unidentified man promised to pay them $20 for each voucher, while also supplying food and cigarettes while they waited in line.

Wrong. The employees that ran the Apple Store weren’t idiots and they capped his purchases. And no purchase, no compensation. So when he walked out of the store with only a few iPhones, the crowd got unruly and the police had to escort him away in a squad car … for his own safety. Many of the homeless were left unpaid, and coincidentally, stranded in Pasadena, 10 miles from the shelter they were collected from. 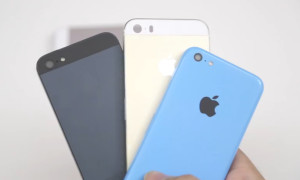 How demoralizing is this? Pay the homeless a few bucks to get you a $200-400 phone that, at the $1000 price tag he claims to be able to sell them overseas, will net you a minimum of $600 each. I’m sure that they were appreciative for the money they received (or maybe didn’t) for simply waiting in line, but is the almighty dollar really more important than human decency?

What does this all mean? It means that the U.S. has clearly become way too consumption-driven. At the end of the day, it’s just a phone. There are hundreds of phones on the market with similar features. But some people have so much of their worth and their pride tied up into one simple product that they are able to get into physical altercations, risk being killed, and exploit the less fortunate. We all have our vices, but situations like these just scream “GET HELP.” If you miss the iPhone’s debut by a day or two, or even a week (gasp!), life will go on.

How do you weigh in on the iPhone foolishness?