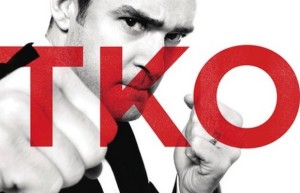 The second single from the second installment of The 20/20 Experience is finally here. Late on September 19th, Justin Timberlake released the audio for his new single “TKO” on YouTube.

A follow-up to the Michael Jackson mimicking “Take Back The Night,”  the urban pop number is nothing new from the JT stable. Another classic Timbaland production, it’s got the hard bass and head-knocking rhythm you’d expect from the duo.

On the track, Timberlake sings about a girl taking him out, and the illusions to boxing are heavy-handed. It’s quite reminiscent of “Cry Me  A River,” with it’s subject matter and sentiment, just pumped up to make it more tough guy and less weepy.

What sets it apart, though, is the fun that JT brings to every track. It’s that “feel good.” It’s that bounce. For some reason, whenever Timberlake and Timbaland combine, magic is made.

Part 2 of The 20/20 Experience will be available for purchase on Tuesday, September 30th.

Check the single out and let us know what you think about it in the comments section below!