Politics Review: Government ‘Shut-on’ and Booker to the Senate

This past week in politics was like the bonus of all bonuses. Some folks believe that politics are boring, uneventful, and mundane but these past few altercations between President Obama and Congress prove all of these assertions wrong. In just 16 days, we saw the formal shutdown of the federal government, the threat of default on America’s outstanding bills and debts, temper tantrums and stage shows from House Republicans, infighting between the Senate and the House, and, to cap it all off, the election of the first black senator from New Jersey, Senator-elect Cory Booker (D-NJ). Booker also happens to be only the fourth black senator to be elected to the Senate since the Reconstruction. Cool, right? I’m Jenn M. Jackson and I have got a whopper of a politics review for you. 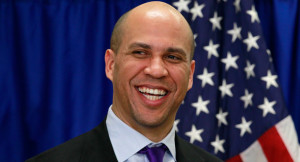 Let’s start with why Newark Mayor, Cory Booker’s, defeat of Steve Lonegan, Republican and former mayor of Bogota, in the New Jersey special election last week is so awesome. Well, there are obvious reasons. Booker is a rising star in the Democratic Party whose impressive background as a Yale graduate and Rhodes Scholar reminds many of our current POTUS. But, beyond that, Booker is only the fourth black senator to be elected by popular vote. And, he is the first black senator to ever have been elected in the state of New Jersey.

So, while his election to the upper house of Congress is an accomplishment in and of itself, it helps assuage some of the unequal representation in Congress which marginalizes women and minorities.

Hey, the Government is Back On…Winning

Perhaps the most exciting news out of Washington DC this week was when major media outlets began breaking news that the Senate was formulating a C.R. (continuing resolution) to get the federal government moving again. Just days ahead of the October 17th deadline on the increasing of the federal debt ceiling, it looked like Republicans were waving the proverbial white flag on the shutdown. Though they had originally come to the negotiation table with a slate of unrealistic asks, it only took them 16 days to figure out that Dems were not in the mood to negotiate with hostage takers.

Apparently, Republicans had no clue that most Americans hate politicians to begin with. So, playing around with real people’s lives for political gain isn’t necessarily an advisable route to success. Kentucky Senators Rand Paul and Mitch McConnell summed it up last week when their mics caught a very conspicuous conversation basically proving that they were more concerned with political gameplay than effectively representing the needs and ideals of the American people they were elected to serve.

Sadly, Republicans still haven’t figured out that they lost this one fair and square. In their zealotry, they thought they could punk President O out of his landmark ‘Obamacare’ legislation which rolled out on October 1st. But, even now, they haven’t conceded loss. Public enemy numero uno, Senator Ted Cruz (R-TX), has refused to go quietly into the night blaming his Senate colleagues for the GOP’s immense embarrassment during the shutdown. Gallup polls showed that the Republican Party’s approval ratings dropped to 28% from a low 38% in September. This is the lowest approval ratings for either party since the inception of the poll in 1992. So, I guess the temper tantrums and verbal abuse of National Park Rangers just didn’t sit well with an overwhelming majority of Americans.

On the flip side, a few Republicans have granted us a glimmer of hope that the GOP is not comprised of miscreants, simpletons, and glue sniffers. Former Governor of Florida Jeb Bush said that his party needed to “show a little self-restraint” in trying to overturn ‘Obamacare.’ Senator John McCain of Arizona called the entire ordeal a “fool’s errand.” And, Senate Minority Leader McConnell flat-out said that “there will not be another government shutdown.” So, there is that I guess.

After all of the hub bub, President Obama made it clear that there were “no winners” as a result of this “manufactured crisis.” But, the damage has already been done. Normal folks didn’t get their paychecks, clinical trials at the NIH were not admitting patients, and our economy lost billions of dollars. Probably the most depressing thing about the resolution of the government shutdown is that the government is only funded through January 2014. This means the Republicans could cause a raucous in a few months and hold the country hostage again. Let’s hope they don’t.

All in all, it was a pretty eventful week in politics. Let’s hope that Booker’s election means that some of the idiocy which caused the shutdown will be eradicated for good.

President Obama immediately shifted focus to immigration reform, saying “We should finish the job of fixing our broken immigration system. There’s already a broad coalition across America that’s behind this effort of comprehensive immigration reform, from business leaders to faith leaders to law enforcement.” Just as quickly his opposition on the right, specifically Senator Marco Rubio (R-FL), has already blamed him, claiming that his actions during the government shutdown have “undermined” any chance of passing immigration reform. So things are looking up.

Republicans have been adamant in targeting the national healthcare website that had a less than stellar launch. Long delays, concerns over security, and glitchiness have only fueled Republican hatred for the program. But, given the fact that folks have until next spring to enroll, those issues will likely fade just as quickly as they appeared.

Overall, it is a great time to be paying attention to politics. With landmark legislation, fiscal crises, and pocketbook changes happening everyday, it has really transformed DC into a political Wonderland.