Dear White People…Blackface is Not an Appropriate Costume

I have been struggling with this topic for a few days now. Do I write a piece about this and draw attention to the idiocy or do I try to take the proverbial high road by just ignoring the blackface craze on my Facebook timeline and Twitter feed? Well, I broke down. I decided to write about it because I am a writer and it’s what I do. So there.

Let me start by saying, what in the purple-polka-dot-all-get-out-Mount-Sinai-over-the-moon-hell is wrong with people? Apparently two white folks thought it was a good time to paint one’s face black and go to Halloween parties as Trayvon Martin and murderer George Zimmerman. Julianne Hough went out as the character “Crazy Eyes” from Orange is the New Black. Meanwhile, “Africa” parties have become the new craze overseas. Not to mention there was a blackface doughnut ad in Thailand. Can we just stop with the blackface? Like, forever?

First of all,I feel the need to give a brief history of blackface so modern folks can understand exactly why it isn’t funny. Blackface, originating in the late nineteenth century, was a clever way for whites – bitter over the growing sociopolitical power of blacks in the Deep South – to get some gratification from caricaturing them in minstrel shows and street ads. These shows and graphics had characters including but not limited to “Jim Crow,” “Zip Coon,” “Mammy”, “Jezebel,” and “Pickaninny.” These stereotypical images of black people – slave and freed – were played by whites on stage. In images, they had exaggerated features making them appear monkey-like and nonhuman. The only way a black actor could play one of these characters onstage was if they did so in blackened skin. Nice right? Black people couldn’t play black people unless they caricatured the caricature of themselves.

Not only that, these caricatures were used by some in the South to perpetuate the institution of slavery. Even after slavery ended, free blacks were continuously threatened by whites who used these images as a means to intimidate them. And, blackfaced caricatures served as a means to legitimize institutional chattel bondage of blacks. This is the definition of oppression, and minstrelsy was the pinnacle of black exploitation and appropriation. 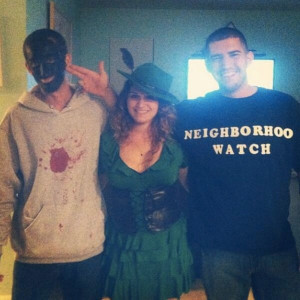 Second, murder is not funny. By sheer definition it can’t be funny since it is defined by emotionally charged aggression between two or more people resulting in death. The case of Trayvon Martin is especially unfunny being that a 17-year-old lost his life without cause and without justice. It is a particularly sensitive case for black people who continue to feel as though their rights remain elusive. So, why in the hell would two white guys, Greg Cimeno and William Filene, think it intelligent to dress as slain Trayvon Martin and George Zimmerman, the man who killed him?

Hoodie, blood stain, and gun shaped fingers make it clear that these two idiots intentionally intend to offend. Taken with a smile, this picture says, “Yeah, I know some random black thug kid got killed but this is a cool costume right?” Shenanigans like these are the exact types of behaviors which continue to alienate blacks and whites from one another. What does the black person at the party do when this guy walks in? How does one navigate that social situation? Donning the blackface shows a blatant level of disrespect for the social struggles of blacks. It insinuates that the black image is one of comedic pleasure and satire. Even a very serious event like the murder of an innocent teen seems to be fodder for the blackface minstrelsy. 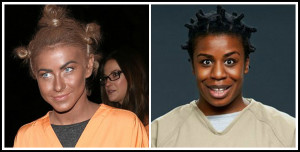 Third, blackface does not show adoration for black people. No matter how well it is done or how tasteful one attempts to be, blackface evokes the feelings, sentiments, and memories attached to the minstrel scene. For black people, this is a varied experience. Some have a more intimate experience than others. But, regardless, blackface can never be divorced from its origin story. This lesson is for poor Julianne Hough. This gorgeous, young white woman decided to go out this past weekend donning bronzed skin and Bantu knots to dress like one of her favorite characters on television. Sadly, Crazy Eyes is black…so, yeah, that happened. Apparently, Julianne meant nothing by it. She thought it was just a normal Halloween costume. She later apologized.

Some have defended Hough while others have argued that she should have known better. Now, I believe that she honestly had no idea that her costume would offend people. I believe that because she seems like an average upper crest gal with no direct connection to diverse groups of people. In other words, she seems ignorant to me. So, finding out that she really is ignorant is not a complete surprise. Danielle Cadet of The Huffington Post outlines this facet of white privilege perfectly:

“The issue with hiding behind the ignorance safety net (i.e. “I didn’t know it was offensive,” or “I thought it was funny,” or “I wasn’t trying to be racist.”) is you take the responsibility off of yourself and put it on everyone else. It becomes everyone else’s (read: black people’s) responsibility to teach you why blackface is offensive– which is the ultimate problem with privilege. It somehow becomes the oppressed person’s responsibility to educate the offender turning the victimizer into the victim …” 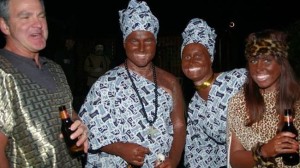 Fourth, blackface should not be used to spice up birthday parties, galas, or other events meant for celebration. It seems like it wouldn’t be necessary to explain this but wearing “African” looking garb does not have to include brown skin. We get the point with just the head wraps and Kente cloth. The weirdest thing about this type of foolery is that folks act like there are no white people in Africa. The young lady who threw the party “is not racist” according to herself but just can’t understand why the costumes at her party would offend anyone. After all, folks dress up as Australians and Germans and no one gets mad, right?

What this girl didn’t seem to understand is that the people wearing the blackface don’t have to, themselves, be racist. Blackface is racist. It is like a built-in bonus to the caricatured nature of minstrelsy. Similarly, slave owners themselves didn’t have to be racist. They could have, on an individual basis, thought that blacks were simply swell. Yet, the institution of slavery was inherently racist. Get it? 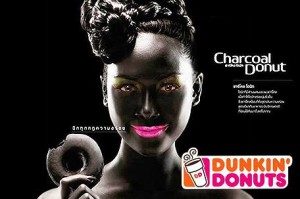 Fifth, blackface is not a marketing tool. Dunkin’ Donuts found this out the hard way when they were called “racist” for an advert featuring an Asian woman who becomes blackfaced after consuming their new “charcoal donut.” After initially defending the ad, they decided to apologize and suspend the insensitive campaign. This campaign was doomed at its inception, but the mere fact that it escaped the building is disturbing. Blackface doesn’t draw folks in. It is jarring, uncouth, and over-the-top. While this works for some things, it probably isn’t a proper recipe for marketing.

In conclusion, blackface is a universal no-no. People will not think you are clever. No one will think you are cool except for other stupid people in blackface. You don’t have to be a historian to know that it might be offensive to harken back to the days of American – or any other version of – slavery. And saying you are not racist does not erase the sentiments your ignorance drums up. Put simply, there were  innumerable atrocities and horrors inflicted on the blacks across the globe in the years preceding 1900 AD. They didn’t stop then, but it wasn’t until then that a majority of people around the world agreed that slavery was wrong. Blackface was a tool of that era. It was a hammer striking a nail to build up the house of institutional racism. Let’s just agree to leave it be.

Tomorrow is Halloween. You’ve been warned.