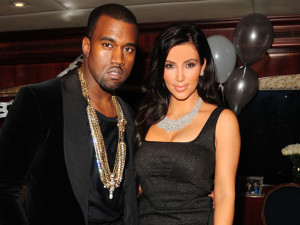 Calling all seats, calling all seats. Please report to the main foyer. Kanye West needs you…now. Kanye “Yeezus” West, father of North West and purveyor of the Kim Kardashian empire, has stepped out to proclaim the greatness of Kim K. Apparently, he thinks that he and the Kimster are more influential than President Obama and Michelle. Yup, he said that.

In a recent interview with Ryan Seacrest, Yeezus spit some knowledge about the “Michael Jackson glass ceiling” he has to fight against as he works to “create.” In this episode of “Life According to Yeezus,” he and his girl are facing “classism” because they aren’t allowed to make more than $200k in five hours…or something…

“People say, ‘Life isn’t fair. What are you complaining about?’ [But] it’s not fair that I don’t have infrastructure for what I want to to do in clothing because I’m crazy influential. Meaning, like, there’s no way for it to not work. When we do t-shirts, we do $200,000 in five hours, it works, but it’s a wall … It’s the Michael Jackson glass ceiling when he couldn’t get his videos played because he was considered to be urban. Now for me, what I want to create isn’t about black and white, but the reason why I’m not able to create what I want to create is about being black and is about classism. And that’s that wall when I took [Kim] to the Met Ball and they put it up on Vogue.com and tried to say she wasn’t there because they didn’t want a reality show girl there.”

No, I didn’t follow any logic there. You aren’t stupid for feeling lost right now.

To further explain his frustration with his station of fame, Kanye sprung to Kim K’s side defending her talent. Apparently, Kim K is having troubles getting the shine that her boo believes she deserves.

“Or like with the Hollywood Walk of Fame … it’s not the walk of singing … it’s the Walk of Fame … and classism has been going on before racism. We’re classist. We have our cool table … and there’s no way Kim Kardashian shouldn’t be on the cover of Vogue. She’s like the most intriguing woman right now. She’s got Barbara Walters calling her like everyday … and collectively we’re the most influential with clothing. No one is looking at what [President] Obama is wearing. Michelle Obama cannot Instagram a [bikini] pic like what my girl Instagrammed the other day… so it’s to say when we are there and [editor-in-chief of French Vogue] Carine Roitfeld supports my girl, that’s a breakthrough … there’s a wall of classism that we are breaking through.”

So, yeah. Kimye is breaking through barriers y’all. They started from the bottom, now they’re…here.

What is most disturbing is that Kanye’s main piece of evidence that his boo’s persona is influential is a picture she posted of her derriere on Instagram. In some morbid way, Kanye thinks that is an accomplishment above Michelle Obama’s, I don’t know, everything. And, I have no idea what Kanye thinks classism is, but I am pretty sure it doesn’t entail the class that he and Kim K occupy being limited in any way. Didn’t Kim make like a gazillion dollars on a marriage that only lasted a summer? Let’s be real. This dude is touched. No. He is terched.

Seriously, what is happening here? Kim Kardashian is a talentless Barbie doll. No one is working to limit Kim K. HER BRAIN DOES THAT. She deserves a spot on the Hollywood Walk of Fame just as much as the Marilyn Monroe costumed homeless people, that dude from the “Chocolate Rain” song, and that William Hung dude from American Idol. Why? Because she is a reality star. She is not an actress, singer, director, writer, etc. She is famous for being famous. What the heck would they put on her emblem if she was granted a spot on the Walk? An anatomically correct bite-sized version of her butt? Geesh.

Kanye, though seemingly talented musically, has turned into the Rumpelstiltskin of Hollywood. He pops up unexpectedly and blurts out something incoherent and vile; then we all spend a few weeks trying to guess his damn name (“Kanye”, “Yeezus”, “Jesus”, “Kanyeezus”, “Psycho”, “Terched”). I just can’t with this guy. I can’t. So, I’m done.

Michelle, Barack, please ignore this installment in the anthology of Kanye’s crazy. Let’s just collectively nod our heads and smile until he returns to his bat cave.