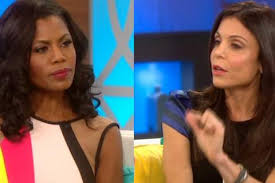 Women really know how to tear one another down. There really can’t be anything more pitiful to watch than two grown women (mothers, sisters, or ordained ministers in this case) acting like catty high school students. Sadly, that is exactly what happened on Bethenny Frankel’s talk show this week when she invited her arch-nemesis, Omarosa, to sit on her couch. Both are reality television stars. But, they went in on one another each implying that the other was irrelevant or unaccomplished. Then, Omarosa threw out the word “mediocre.” And, well, the ish hit the fan. But, did she have a point?

Bethenny Frankel got her celebrity start a few years ago when she appeared on the Bravo’s Real Housewives of New York. At the time, she was a single lady looking for love. Now, she is a divorced mother of one who has her own talk show. She is the personality behind the “Skinny Girl” brand name and has worked in fitness for quite some time. So, good for her. Omarosa also got her start in reality television. She appeared on Donald Trump’s The Apprentice back when the folks he casted actually had to have business acumen and professional expertise. She has had several spinoff shows but also works as a professor and ordained minister. In all, both women have done and continue to do well for themselves.

Apparently, the beef between Bethenny and Omarosa started a while ago when Bethenny made some comments about Omarosa on The View. She implied that Omarosa did not have a real career and that she has no brand recognition. Now, while some of this is true – given that Omarosa hasn’t made any products or made her career in branding – it obviously upset Omarosa. In response, Omarosa explained herself and who she is as a television personality.

While both women were already being a bit catty and tempers were flaring, the interview got worse from there. Omarosa sat on the couch of Bethenny Frankel’s daytime talk show and said, “…you [white women] get to walk around and be mediocre and still get rewarded with things. We [black women] have to be exceptional to get anything in this business.”

So, yeah, that happened. It is kind of funny how Omarosa went from “You make cupcakes. I worked in the White House. Get a grip” to “we have a chance to turn this around.” To which Bethenny answered. “No we don’t” as the audience cheered.

Honestly though, I have to give Omarosa her credit here. She had the courage to go on a talk show hosted by someone she obviously doesn’t like to talk about beef they have between them. It must be humbling to be the guest of one’s enemy. But, during the interview, she spoke candidly and factually about words Bethenny shared behind her back on the largest talk show on TV. And, instead of being the bigger woman and apologizing, Bethenny said “I meant every word of  it” (after denying she said some of it). Bethenny should have apologized for being catty and moved on.

A bigger social commentary issue Omarosa drummed up was her comment that white women can be mediocre and still get rewarded in the industry. While Bethenny’s predominantly white female audience couldn’t appreciate this, Omarosa’s words do hold some truth. Black women continue to struggle in Hollywood. It is no secret that black women find difficulty with limited opportunities and truncated creative voice in the entertainment industry. If Bethenny were a talented talk show host, she would have taken the opportunity to develop this line of conversation with Omarosa instead of falling down the messy girl rabbit hole.

In the end, neither one of these women is relevant enough on her own for this altercation to even really matter that much. But, it would have been nice to see them come together rather than apart on such a grand stage. Neither of them is Oprah or Beyonce. They may be one day but that day isn’t today. If they continue burning bridges like this, they may find it a lot harder to get to the level of success they’re aiming for.

Should Bethenny have apologized for her comments on The View? Who do you think was in the wrong? Sound off in the comments below.