Real Housewives of Atlanta is Baaaack 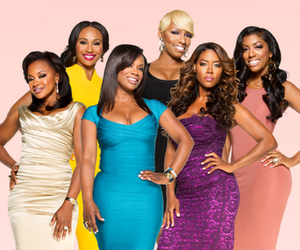 Everyone has their vices.  Mine are comprised of cheesecake, carbs, and shameful reality TV shows. To feed the latter vice, I indulge myself on Real Housewives of Atlanta. I have previously made it clear that I am unapologetic about my love for the show so no need to get radical on my television interests in this arena. And now, the show is back with its sixth season. From the looks of things they have spared no drama this go ’round. Are you as excited as I am?

From what I can tell, my absolute fave, Nene Leakes, is totally smelling herself and being as fabulous as she wants to be. Meanwhile, Kenya Moore, former model and Miss USA 1993, is still a bit touched and is creating marital issues for Phaedra Parks, ratchet ATL lawyer who just gave birth to her second child. Cynthia Bailey is still having the same financial and communication issues with her husband that she has had all along. Kandi is stuck between her mom and her man (again). And, poor Porsha is just trying to put the pieces back together after Kordell’s abrupt divorce declaration via Twitter. So, much of what we know from last season is still on the docket but it seems so much juicier now.

Yes, this show is ratchet. But, it is kind of upscale bourgie ratchet. That makes it better, right?

From the preview, it looks like Kandi will be getting fists-to-cuffs  on someone this season. And, it seems like some of the issues from last season will get wrapped up between Kenya and, well, everyone else. But, the best part of the show is the absence of ousted Sherae and Kim Zolciak who really brought nothing to the production.

Tonight’s season premiere was pretty lukewarm with Nene and Porsha commanding much of the screen time on the episode. Nene, because her personality is larger than life, will likely get the chance to make this entire season about her. Being the highest paid and most influential on the show will buy you that kind of clout. Porscha, on the other hand, will continue to receive press because of her very public and embarrassing divorce. Kenya will command the show given that everyone hates her and she stirs up drama quite frequently. Outside of that, the other ladies will likely teeter around as filler until something major happens.

Why do I enjoy this ratchet affair? Well, because I love Nene Leakes. I am pretty sure if she left the show, most of the viewers would too. Also, these women, despite all their cattiness, are quite successful businesswomen and entrepreneurs. They really do represent black women well in many ways. From lawyers to actresses to philanthropists to talent managers, these women are really thriving in their own ways. There are no absolute train wrecks on the show (anymore) or belligerent idiots whose uncouth antics undermine their own intelligence (*cough* Kim *cough*). And while RHOA gets a bad wrap, like all reality shows do, it really is the cream of the crop.

So, like my Tyler Perry rationale, I refuse to throw the RHOA baby out with the reality television bath water. I will be watching these ladies share their personal stories and struggles until the wheels fall off. Will you?

What do you think about RHOA? Too ratchet for your comfort? Let me know in the comments section below!