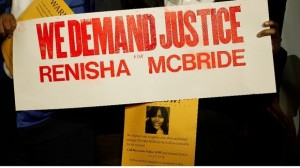 This week, news of slain 19-year-old, Renisha McBride, broke through the mainstream media. Hearing that this young lady was shot in the face with a shotgun in Dearborn Heights, Michigan after a homeowner believed her to be an intruder led many to question if this was another Jonathan Ferrell or Trayvon Martin story. Originally, news outlets reported that the homeowner, whose information or race has yet to be released, was acting in self-defense. However, they later reported that the weapon discharged ‘accidentally.’ Now, the shooter’s lawyer has called the shooting ‘justified.’ If we didn’t know this issue was racially charged before, we do now.

The Dearborn Heights police department has yet to arrest the shooter. No charges have been brought against him at all. Throughout this process, it seems there has been a concerted effort to remove any blame from the shooter. Now, here is what we know.

1. Dearborn Heights is predominantly white. So, the probability here is that McBride was shot by a white person. Is this significant? It most certainly is. George Zimmerman single-handedly put the “Stand Your Ground” laws on the map when he murdered Trayvon Martin last year. Ever since then, the country has been embroiled in litigation and altercation surrounding the laws’ legitimacy. Many people feel as though the laws favor blacks, but the statistics just don’t bear them out. From MotherJones: “According to a study commissioned by the National Urban League, homicides were “justifiable” in 49 percent of cases in which a white man shot a black man compared to just 8 percent of cases in which the roles were reversed.” It is almost uncanny that the lawyer in this case uses the word “justified” when describing the murder of McBride. She probably knows that that buzzword will work in cases like these. If the shooter is white – and he probably is – the prevailing notion of “justifiable murder” will favor him in court. 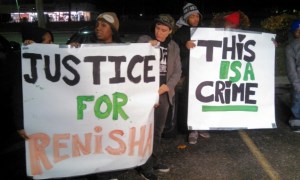 2. The police have been working to implicate the victim, Renisha McBride in some type of foul play even though she is – indeed – the victim. This is a tactic often employed in this country against people of color. The narrative plays to preconceived notions that nonwhites are more dangerous and more deviant than whites. This happened when Trayvon Martin’s dirty laundry started coming out – a fight in school, an implication of drug use – on a mass scale so that he could be scrutinized by the American public, and inevitably, a jury of his peers. Apparently these things are worthy of cold-blooded murder. In order to make the murder seem okay, the media and other white people will continue to grasp at straws to make McBride’s murder seem rational too. Now, they are asking why she was knocking for help after 3am when her accident happened around 1:30am. Somehow, asking this question casts doubt on her reliability as a witness to her own death. Seems counter-intuitive that the lawyer for the shooter would like us to reserve judgement of her client but no one has implored the American public to do the same for Renisha McBride.

3. The story has changed twice. Was it self-defense? an accident? or justified? If the act was in self-defense, the defense would have to prove – beyond reasonable doubt – that McBride posed a threat to the homeowner. Since she was shot outside on the porch, it is kind of difficult to prove that. Renisha McBride posed no threat other than the fact that she had brown skin. She never gained entry into the home and likely had no intention of entering without consent of the homeowner. Claiming that the gun fired accidentally is equally as faulty. The gun was loaded and the safety was off. The homeowner probably knows how to operate the weapon, so this claim would land him right in the jailhouse. So where does the case land now? In justifiable land. All the defendant has to claim now is that he was afraid. It worked for George Zimmerman.

We will probably find out soon that the homeowner is a white male. If it were a black male, we would have known already because white America loves to villainize black men. We will also find out how long it took him to call police. We will find out who he is and what he does for a living. But, what we will never find out is Renisha McBride’s side of the story. These types of murders are devoid of justice not just because of the crimes themselves but because it is almost impossible to adjudicate fear.

Hopefully, Renisha McBride will get the justice she deserves. It’s high time Americans buck the trend and defy the precedent these types of murders engender.