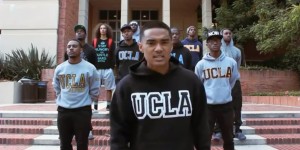 When I first saw the headline, “UCLA Has More NCAA Championships Than Black Male Freshmen,” I thought, “Well, yeah. They have hella championships…” In that moment, I realized I was part of the problem. Low college attendance and graduation rates are more of those ‘things’ that many of us (the black collective ‘us’) have come to normalize. But, Sy Stokes, a junior Afro-American studies major at the University of California, Los Angeles led a group of his peers in a spoken word video denouncing this trend. While I appreciate their fervor, I honestly gave up on affirmative action a long time ago. And, it seems videos like these just fall on deaf ears anyway.

The statistics in the “The Black Bruins” video were unsurprising to me. According to the short, in fall 2012, there were only 660 black male undergraduate and graduate students out of 19,838 which is roughly 3.3%. Of those 660, 65% were undergraduate athletes. Only 48 black male students were admitted that semester.

Wondering what happened to affirmative action in California? Proposition 209, a constitutional amendment formally changing the verbiage in the California state constitution, was on the ballot in 1996. It prohibited “public institutions from discriminating on the basis of race, sex, or ethnicity.” This meant that race could no longer be considered as a factor in college admissions. It passed with about 55% of the vote and was upheld by the California Supreme Court in 2000. In 2012, an appellate court in the state agreed to upholding the constitutional amendment. The UC and CSU systems are both impacted by these court proceedings.

I wasn’t surprised by this video because a) I went to USC and knew many students at UCLA who envied us for our semi-large black community on campus and b) I actually understand that affirmative action’s overturn had an impact on black college enrollment. I first watched the video and got irritated. I thought, “Don’t they understand that most white people don’t like the idea of using race in college admissions?” I scowled, “What is signing a petition supposed to do to fix the problems with opinions on affirmative action?”

Truthfully, that makes me partly culpable. Right now, blacks and Latinos are losing when it comes to affirmative action law. We gave up a long time ago. Some have questioned whether or not affirmative action laws even work. They argue that racial minorities might be better served attending a less elite school than struggling through studies at top-notch colleges and risking dropping out. As someone who had a hard time getting through an engineering program at a top-notch school, I am torn on this assertion. While I know many who did drop out, I’d much rather have the chance and fail than to never have the chance at all. And, shame on me for knowing that without having the courage to do something about it.

So, yes, we have established that blacks and whites are on opposite sides of the spectrum when it comes to affirmative action. But, that’s probably because black and whites oppose one another on pretty much everything race related. Many whites acknowledge that white privilege exists but few agree that blacks, Latinos, and other minorities should receive any special treatment to offset it. I wonder how these same whites feel about the WWII GI Bill which granted many of their great grandparents educational opportunities in a time when blacks were still excluded from functioning society and Latinos were an almost non-existent race in this country. Would they support that kind of affirmative action today?

Masking rewards for white families by doling them out to those in careers predominantly and historically held by white males, give or take a few minorities here or there, is still affirmative action. And, it is bigotry to conversely argue that using race alone somehow infringes on the constitutional rights of whites.

Better yet, I went to college with many whites who were befuddled when I told them about the dearth of teachers and textbooks at my high school. They were shocked to learn how many people didn’t graduate at all let alone go to college. But then, it was kind of okay because we were all brown and black. So, our race makes us like that right? People like me are some type of special breed. The ones who make it are treated like unicorns. They acknowledged that my racial group was, somehow, marginally impacted by social and economic conditions that were completely foreign to them. Wouldn’t it necessarily follow then that if educational disparity in adolescence is experienced marginally on the basis of race then educational rewards in young adulthood should be calibrated accordingly?

It’s actually kind of funny to fully see the cognitive dissonance whites have when acknowledging that they don’t have racialized injustices and experiences play a role in their daily lives but they don’t think anyone else should be allowed to acknowledge theirs. Yet, as long as they continue to vote in larger numbers on issues like these, nothing will change. The best we can do is continue to talk about it. Having the attitude I had while watching this video (Trojan versus Bruin thing notwithstanding) does nothing to right the wrongs we experience everyday. And, affirmative action will continue to be a losing battle the more we acquiesce to and accommodate institutional racism and systemic bigotry.

The more we all agree to address our grievances publicly, the closer we will get to the meta-racial utopia we so intensely yearn for.