The Case for Keeping Cursive in Schools 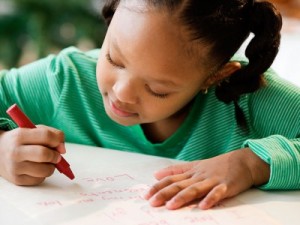 I learned how to write in cursive in the third grade. I hated it. Making all the curly letters frustrated me immensely. I felt like – at eight years old – I was wasting my time learning something I would never need. It just seemed pointless. I remember feeling much the same way in my ninth grade Chemistry class. And, again in my tenth grade Trigonometry class. Truthfully, I could have gone straight from Algebra to Geometry to Calculus without the boring detour to matrix sleuthing land. But, I digress.

In my childish ways,  I had no clue what learning those subjects did or would do for me in the long-term. Enduring them was probably part of the learning I needed. Today, I have no doubt that each of them developed me in some unique and imperative way. Sadly though, the one that I can likely credit with my enhanced hand-eye coordination and aptitude for written literature may be disappearing from schools at present. And, with that fate we will witness yet another self-inflicted disability for today’s children and tomorrow’s adults.

Recently, according to the Associated Press, the Common Core educational standards were adjusted to exclude the cursive handwriting training I endured so many years ago. Because the times are a changin’, “State leaders who developed the Common Core – a set of preferred K-12 course offerings for public schools – omitted cursive for a host of reasons, including an increasing need for children in a digital-heavy age to master computer keyboarding.” In other words, people don’t really write anymore so no need to teach children how to.

This logic is really quite disturbing when you think about it. If we eliminated every trade when it neared obsolescence we’d have no use for most art courses and at least two thirds of the math training we’ve since forgotten (some more than others). 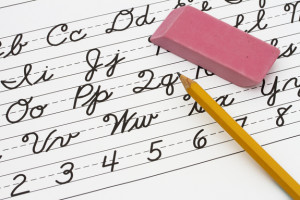 Not only that, cursive writing, and handwriting in general, has its educational and developmental benefits. Studies show that when writing by hand, both children and adults have increases in their neural and cognitive activity. It seems writing is something we were purposed to do. Losing this ability in favor of typing into perpetuity seems like just one more step toward the bulbous egg-like-ness of the fictional future humanoids in Wall-E. Pretty soon we’ll need a machine for everything, even to write our own names.

Then, there is the especially depressing consequence of quitting cursive. If we don’t learn it, we can’t read it. Every historical text or archived love letter will be forever foreign to future generations incapable of deciphering their eloquence and nuance. All these years spent developing our identities in the form of written language will be lost to lousy block letters and homogeny. How will people sign their own names? It is truly disturbing when one ponders the possibilities.

Am I the only person who looked forward to high school so I could learn how to bake cookies and casseroles in Home Economics class? No one else watched Steve Urkel in Family Matters back in 1992 and thought, “I can’t wait till Home Ecs class…”? Just me? Okay.

Well, by the time I got to high school, home ec was a thing of the past. Every class had been converted into a lab or music room. Who knows what baked creations I would have made by now? I could have been the black Martha Stewart. I’m still bitter.

I, for one, think today’s children (and their children and so on) should be subjected to the same irritating cursive training I was made to suffer through. A seeming rite of passage of my adolescence, cursive writing should never turn into esoteric knowledge like Pig Latin and Ebonics (whatever that is). Cursive is cursive. It is learning to be a complete functioning human being, one that can create and record. Not everything needs technology. And, not all human functions should be swapped out for machinery.

Plus, who’s gonna sign the receipt when we need to order all those extra keyboards anyway? You might wanna think that one through cursive killers.