“Thanks For Nothing, Jay-Z” Said Black People Everywhere 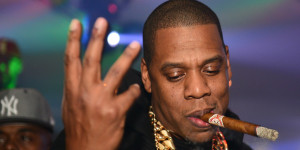 Big shocker y’all. Jay-Z, rapper and husband-Bey, is standing by Barneys (aka “The Man”) and releasing his clothing collection next week even though the retailer has been accused by two black shoppers of out and out racial profiling. Apparently, we mistook Jay-Z for a socially responsible thought leader in the black leadership community. Well, he sure showed us.

A couple of weeks ago, I mentioned that Jay-Z’s street cred might be at risk if he didn’t speak out against Barneys. Now, I wasn’t saying he necessarily needed to cancel the collection altogether – that would just be silly and in poor business taste. But, I think we were all hoping he would at least have a harsh word or two to admonish the retailer for what former employees have noted is a systemic malady of prejudice within the margins of the company.

Even with standing litigation against the retailer, Jay has decided to soldier forward with his plans, stating the following on his website Friday:

“While I await the findings of the Attorney General’s Office, I have agreed to move forward with the launch of BNY SCC collection under the condition that I have a leadership role and seat on a council specifically convened to deal with the issue of racial profiling. I am in a unique position to use my voice to affect change to this disturbing issue. The easy position would have been to walk away and leave policy making to others hoping that someone addresses the problem. I will not leave the outcome to others. I will take this into my own hands with full power to recommend, review and revise policies and guidelines moving forward. I am choosing to take this head on.

As I previously stated, the collaboration with Barneys has always been about giving and The Shawn Carter Foundation. From this collection, the Foundation will receive not only 25% of sales, it will now receive the additional 75% of Barneys’ sales, totalling 100% of all sales from BNY SCC. Along with 100% of sales from the collaboration, the Foundation will receive an additional 10% of all retail sales from Barneys New York stores nationwide and Barneys.com on November 20th.”  – Shawn “JAY Z” Carter

Well, that oughta do it. Jay-Z will become a consultant for the retailer and help usher them into the 21st century where black people are allowed to buy things – albeit expensive things but things nonetheless. To make all of us feel better, he will donate all of his earnings to charity. And, Barneys will donate no less than a million to The Shawn Carter Foundation as well. So, that’s nice.

But, here is the underlying issue, this all just looks like an exercise in face saving. Barneys got caught in a major way. Jay-Z was already in the throes of launching an insanely hot collection. And, it seems like a case of the wrong racism at the the wrong time. I would like to think that Jay-Z would have done more had it not been so close to the launch of his line. But, maybe that’s just wishful thinking on my part.

The truth is, this debacle won’t take any food out of Blue Ivy’s mouth nor will it harm Barneys. But, there is still that question of Jay’s street cred. For a summation of that, one can simply turn to The Daily Show.

Since when did rappers get so tied up in the cash that they lost sight of the persecution that birthed their art in the first place? While Jay-Z and Barneys CEO, Mark Lee, – who is probably sick and tired of all these activists holding his nose the fire – ride off into the sunset smoking cigars and whatnot, us little guys will still be here wondering whatever happened to the rap game Tupac Shakur once told us about.

Remember when he said ,“They have money for war but can’t feed the poor”? I’d say he said a mouthful there. Getting more money seems to be a lot more important than the folks spending it. Barneys has yet to even acknowledge that the racial profiling issues exist.

Seems like Jay and Lee thought charity would get them a ‘Get out of jail free’ card on this one. Maybe we wouldn’t notice our accountability system being sold off for some Givenchy and Ferragamo. Nope. Sorry guys. It isn’t hard to see that you’ve got another avenue to benefit from this deal. Whether it be directly with designers and clothing lines – which have documented issues with racism – or with financiers in the background, you have got a lot to gain (or lose) here.

We (figuratively) ain’t buyin’ it. Hopefully, we literally won’t buy it either.