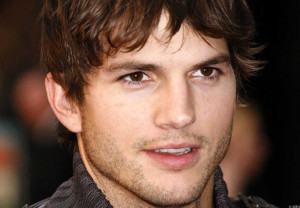 But we already knew that, right?

Thank you Ashton Kutcher for having the balls to stand up to retail hegemon Walmart this week – even if it was only via Twitter. Walmart has been trying to convince us all that they care about their employees but it doesn’t take a rocket scientist to see through it…an actor will suffice. 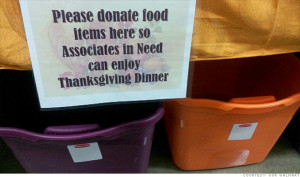 This week, news broke that a Walmart store in Canton, Ohio was holding a food drive to feed its own employees. Next to an array of bins, a sign was posted which stated, “Please donate food here so Associates in Need can enjoy Thanksgiving Dinner.” Why is this such a bad thing? Well, because usually companies don’t hold onsite food drives and ask people to donate to each other. It’s like a game of Secret Santa with gifts like canned green beans and boxed mashed potatoes. They are in essence asking their already underpaid employees to spread some of the little wealth they have around to the other underpaid people instead of simply paying folks a livable wage in the first place.

Why is this such a raucous event? Well, because the Walmart family is rolling in dough. A 2010 study found that the six Walton heirs alone were worth the same amount as the bottom 40% of Americans. Have you ever heard of anything so preposterous?

Meanwhile, Walmart’s employees have to rely on social programs like Medicaid and food stamps to sustain their households to the tune of almost $1 million per year. This is probably because two thirds of their 1.3 million associates (about 825,000) make less than $25,000 per year – that’s the federal poverty line. Let’s not even get started on the fact that Walmart won’t let the employees unionize nor do they want to increase wages for their struggling associates.

So, let’s get this crystal clear: 1) Walmart pays wages that keep families in poverty, 2) Walmart expects associates to pass what they do have along to one another, 3) Walmart heirs could probably pay to run the households of every Walmart employee for a year, and 4) this horrible cycle means that taxpayers (like us) have to subsidize the exploitation. In essence, I am paying for corporate slavery. Well, that’s just great.

The photo was leaked to an organization working to help Walmart associates unionize. It makes one wonder if the company’s leadership has any shame at all. Well, Ashton Kutcher might have caught wind of this leaked picture prompting a very public Twitter war.

.@aplusk It’s unfortunate that an act of human kindness has been taken so out of context. We're proud of our associates in Canton.

@WalmartNewsroom you had 17 billion in profits last year. You're a 260 billion$ company. What are we missing? http://t.co/pZM4qweQIO

@aplusk We think you're missing a few things. The majority of our workforce is full-time and makes more than $25,000/year.

@aplusk Lastly, every year, we promote about 160,000 people to jobs with more responsibility and higher pay.

Walmart should be the leaders not the low water mark http://t.co/qdCOZWv0gh

"People unfortunately mischaracterize this program, which is an act of kindness," RE: Canton store food drive: http://t.co/jnk6XsdkNa

I would love to see actual stats to support Walmart’s claims. Looks like an open can of responses to me. And, Kutcher’s point still remains valid. The fact that they are even talking about the $25,000 per year standard as if it should even be a standard is disturbing. With billions of dollars in profit, I find it hard to believe that they can’t ensure that none of their employees are in poverty at all.

Walmart’s response to Kutcher is summed up nicely in their new commercial.

They are marketing themselves using perks that most companies offer as a baseline for employee satisfaction. You’d think basic benefits were a privilege not a right.

All I get from the commercial is that the Walton family threw some money at the bad press problem to tell their side of the story. You know, about the “real Walmart.” It’s a veritable pantheon of buzzwords and catch phrases perfectly positioned to get the American public off their tails.

In other words, “Don’t be afraid of us. We aren’t here to hurt you. We’re just like you.” That’s the same thing all the killer aliens say in the movies before they unleash their payload on us. Just sayin.

The Waltons aren’t like us. And they are unapologetic about it. If they cared in the least, this wouldn’t be a news story. So, kudos to Kutcher for calling BS. Let’s keep an eye out for any other celebs willing to stand up for American families this holiday season.