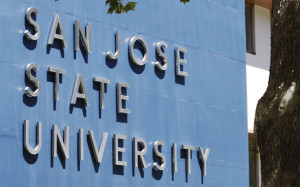 America is not a post-racial society. Black people are reminded of that everyday. One black student at San Jose State University learned that lesson when he was allegedly attacked and tortured by three white roommates on-campus. Colin Warren, 18, Joseph Bomgardner, 19, and Logan Beaschler, 18, were arrested and charged on Wednesday, November 20th, with misdemeanor hate crime and battery charges following these events. If convicted, they could face up to a year in jail.

These young men systematically and deliberately intimidated their then 17-year-old roommate because of the color of his skin.

The Huffington Post reports that they nicknamed him “three-fifths” and “fraction” which refers to the 1787 Three-Fifths Compromise which granted partial citizenship (humanship) to southern blacks so that their slave owners could benefit electorally from their chattel bondage. They also physically handled him forcing him to wear a “U-shaped” bike lock around his neck, called him the N-word, and hung confederate flags and Nazi paraphernalia in the shared dormitory room.

At one point, the students reportedly barricaded the student in a closet, knowing he was claustrophobic.

All of these events happened in a suite shared by a total of eight occupants. Sadly, this young man had to endure the treatment from August 20th to October 13th of this school year.

What is interesting about this issue is that it took place on-campus in one of the most liberal states in the country. California residents often pride themselves (ourselves) on being particularly progressive. Each of these students is from central and northern California. But, this story sounds more like something one would hear about in the Civil Rights Era in the South.

What is even more disturbing is that the young men told authorities that they were just pranking the young man and that their actions were “jokes.” So, either these young men are sociopathic or they just didn’t care about all those messages growing up about respecting others’ differences (or maybe they just have no home training). I vote sociopathic. 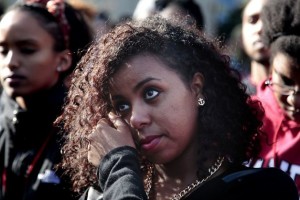 Black students on campus organized a “Black Thursday” rally to demand justice and answers regarding these events.

The question most are likely asking is: are we safe anywhere? Black people seem to be in mortal danger while sitting in cars, while walking home from local stores, while knocking on doors, and while waving down police officers for help. Now, this case shows that college campuses – in even the most liberal state in the country –  aren’t safe either.

But we kind of knew that already. With the recent video from UCLA students about the dearth of black men admitted and the University of Michigan fraternity’s “Hood Ratchet Thursday” party that helped birth the #BBUM (Being Black at the University of Michigan) hashtag, it’s clear that public college campuses are not the melting pot meccas that everyone assumes them to be. Their lack of diversity seems to turn them into a breeding ground for the George Zimmermans of the future.

They are not the safe zones that they should be because we continue to avoid race like the plague. We behave as if closing our eyes very tightly, clicking our heels, and wishing it away will actually work.

For some of us though, our race isn’t something people only know when we check it off on a form. Our race lays smoothly on our skin. And, it signals a gamut of struggles, awkward experiences, atrocities, and risks that we simply never signed ourselves up for. For white folks, nah, not so much. But, that doesn’t mean you all can’t get your acts together anyway.

C’mon white people, you can do better than this. I know enough of you – whom I deeply adore – to know that this is atypical for you. You’ve got to take responsibility for your inaction on this issue. Your lack of activism, your silent bigotry, your liberal notions of equality are impotent reactions to the ongoing battle blacks face with your cousins, uncles, friends, brothers, and drinking buddies. I implore you to push them to be better. This is really getting old now.

Writer’s note: The students in the aforementioned article were not arrested. They were suspended as authorities await their surrender.