Social Activism Tastes Better When the Waiter is White 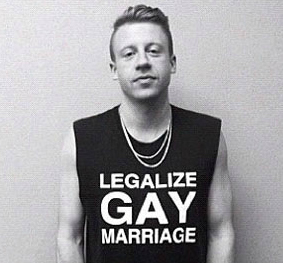 Ever heard the phrase, “When regarding a message, consider the source”? Well, it seems white people (and everyone else) have been doing that about pretty much everything. White supremacy means that everything good has to be white. Heroes, casts of hit movies, heck, even messengers need to be white. Social activism via social media is the newest “it” thing. And, even though racial minorities have been activism-ing for decades, it seems the only time the message is palatable for mainstream white society is when it is delivered by another white person.

I guess that means I need to get a white friend who can write then, hunh?

Remember when Macklemore made that song about gay marriage like he was saying something new? I remember sitting in the car with one other black girl and three white girls when I first heard it. The other black girl and I were like, “meh.” But, one particular white girl was just in awe of how courageous Macklemore was for singing about such a taboo subject. “This song is really powerful,” she swooned. Yeah, it’s a nice song. But, it can’t hold a candle to Marvin Gaye’s “What’s Goin’ On?” It seemed to me like that phenomena on The Simpsons when Marge says something like forty times then Homer says it and acts like he initiated the idea. It’s like social activism Groundhog Day every time a white person decides to take a logical stance against white privilege in favor of equality measures.

I first thought this was so when the whole #WhiteGirlsRock idiocy happened. Basically, a bunch of white (and black) people were offended and butt-hurt that they couldn’t have someone as awesome as Queen Latifah tell them they rock. So, they made fun of the annual Black Girls Rock! Award Show on Twitter…like grown ups.

What was most interesting about this whole debacle was a piece on Huffington Post by Olivia Cole called “Why I’m Not Here for #WhiteGirlsRock.”An extremely well-written piece (honestly, I want to write like Olivia Cole when I grow up), it was hard-hitting, honest, blunt, and yummy. It was in the friggin “Black Voices” section. It even used current black slang in the title.

What disturbed me when I first read it was that Cole was literally rattling off factoids about the black community that we (meaning black activists) have been opining on for-(what seems like)-ever. It was like she grabbed a megaphone and stood atop the Empire State Building yelling, “My white brothers and sisters, listen to me. For I have seen the Promised Land and I have a message from our black brethren. Gather ’round white people. Gather ’round!”

While I agreed with her sentiments exactly, I was offended that she was the Chosen One to deliver the Good Lord’s message to the masses. Why were all of my black friends on Facebook eating it up like the Soup of the Day and shunning black activists who had been delivering the same – if not more rooted – message?

Well, I pondered on that for a bit. Then I went all bat shit crazy about it too and shared it on all of my social networks like I had written it myself. I forgot all about it…until today…when it happened again.

I went to see Hunger Games: Catching Fire. I friggin loved it. And, I was pleased to see Jeffrey Wright as Beetee, a very intelligent tech geek who, in the film, just so happened to be black (shout out to the blerds of the world). Why was I happy to see him in the role? Well, because I’m black and for all the reasons Cole mentioned in her piece about #WhiteGirlsRock. Black people just don’t get a lot of shine in Hollywood.

But, inside, I knew there would be some white people drama about the very same thing I was reveling in. Somebody somewhere would be personally offended because a cool role in a movie was “taken” by a black person (cue the convulsing trauma to black women everywhere that was Rue in the film trilogy’s first installment). And, I was right. White folks didn’t like brown Beetee. So, Olivia Cole jumped to our rescue again.

Her new piece, called “Hunger Games and the Limits of White Imagination,” is a spot-on indictment of white superiority and supremacy complexes. It was so good, I read it twice. My favorite part is the passage below.

“Our imagination and subconscious are so saturated with white supremacist notions of goodness, beauty, and heroism, that when confronted head-on with an image of a black man who is brilliant and kind and normal and who saves the day, we transform into robotic versions of ourselves: Does… not… compute. Hero… must be… white. It’s this line of thinking that turned Disney’s Princess Tiana into an animal for 95 percent of the movie. The collective white imagination had difficulty imagining a black girl as a princess… and so she became a frog.”

This passage resonated with me so much that I just had to post and reshare on my fan page. I thought, “People need to read this like yesterday.” Then, something happened. It was like in all the movies when someone is a millisecond from death and everything passes before their very eyes. Only, for me, I was just recalling the last time I did this for another Olivia Cole piece that made me want to run outside in my suburban Orange County neighborhood screaming, “I AM SOMEBODY!” Damn you Olivia Cole…making me feel important and shit.

But, then, I became concerned. Why was I swinging from Olivia Cole’s writing pen, hanging on every word like she was an ivory messiah? Why was I so psycho about this white girl telling my black story to other white people?

Then, I figured it out. And, I felt guilty.

I love Olivia Cole because she is white and she is parroting black people. Olivia Cole’s very existence gives my humble activism purpose. Somehow, Olivia Cole is every black activist’s phone-a-friend. We’re all like, “Well, she said it so I trust that answer.” She is literally saying things that we already know and we are treating it like prophecy. And, that’s disturbing. Not to mention there are a ton of black writers out there who likely will get less shine for writing more poignant pieces. It’s like on American Idol when the white person sings a run and it’s “creative” but then the black person sings an even better run and it’s “predictable.”

Part of me thinks we should be serving our own messages to white folks hot and fresh, cut out the middle(wo)man. We should be the ones on the mount with the tablets and whatnot. But, then I wonder how far the message would go if we were the vessels; identical content would be rendered impotent, seen as complaint and “40 acres and a mule” activism.

It seems whatever activism white people serve will always taste better than anything from a black, Latino, or Asian person. I mean, what do we know? We’re just marginalized.

White people get extra credit because they have nothing to gain from activism. They’ve got privilege to buoy them when the race waters get shaky.White people are basically doing social outreach when they speak up for blacks, or gays, or Muslims, or whomever else is an “other” at the time.

I can’t tell if that means they are pitying us or sympathizing because they certainly can’t empathize. Olivia Cole has no idea what it is like to be black. But, she sure knows something about being white. And, her brand of activism is killing the game right now.

I guess social activism is for white women too then.