Michelle Obama Can Lean Whatever Direction She Wants 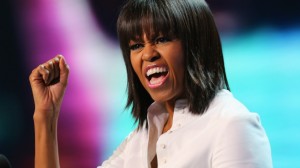 I was all geared up to write this piece last weekend, and earlier this week, and yesterday. Then Brittany Cooper at Salon wrote it this morning. Now, I am a parrot. But, my points are still valid, therefore I will share them.

It all started last week when some prominent black feminists were up in arms over an article over at Politico magazine by Michelle Cottle called “Leaning Out: How Michelle Obama Became a Feminist Nightmare.” I am not sure I have read anything more absurd than the notion that Michelle Obama is a “feminist nightmare.” The central thesis of the piece – that Michelle O is holding to ‘traditional’ gender roles as First Lady rather than working toward feminist initiatives – is inherently flawed, ignorant, and misguided. It’s almost like white feminists forget that solidarity is for white women.

Now, this issue is extremely complex. Much more complex than Cottle’s piece allows for. Her contention with Michelle O’s desire to be the preeminent “mom-in-chief” proves that her white understanding of the word “mom” is much different from that of many blacks. And, even her acknowledgement of the “Angry Black Woman” trope as a potential deterrent to Michelle’s potential or, perhaps, desired activism is a short-sighted, gratuitous effort to basically say that Michelle O is scurred of criticism for doing the right thing.

Yes, Michelle O has spent her time growing gardens, encouraging education, and championing healthy kids (which is already groundbreaking in a community suffering from low high school graduation rates, higher levels of childhood obesity, and disproportionate struggles with employment). And, while these initiatives are probably apropo for first ladies, they mean something totally different for members of the black community. Michelle O’s symbolism already carries with it a great deal of responsibility. She is tall, deep brown, educated, and articulate. She is the poster-child for stereotyping from right-wing haters. But, somehow, even amidst the criticisms of her shapeliness and fit biceps (all gendered criticisms typically employed by those who subscribe to misogynistic social norms) she has maintained over 60% approval from the American public. Her approval ratings are higher than the President’s, and Congress’ ratings added together.

Melissa Harris-Perry dealt with the diminutive white feminist scope Cottle is attempting to use to analyze Michelle Obama’s first lady-hood on her show last week.

What Harris-Perry didn’t have time to say was that black women are often categorized into three main tropes: Mammy, Jezebel, and Sapphire. The Mammy is the beast of burden used to take care of and support the sanctity of the white family. The Jezebel is the procreation machine used to create more low-class blacks and undermine social mobility for black families. And, the Sapphire is the angry black woman who Cottle actually managed to acknowledge as a potential label Michelle O has to contend with.

The nuance with these stereotypes is that EVERY black woman who comes into contact with mainstream white society is pegged into one of these general groups. Regardless of education, occupation, or accomplishment, any of these women can be minimized to a simple one-dimensional image within seconds. It has happened to me on many occasions. And, sadly, none of these tropes is Good Mother. That one is reserved for white women.

But, being a good – or great – mother is something that Michelle Obama prides herself on. And, the social issues she has advocated for align with that goal. Not to mention the fact that many women in this country relate to the struggles associated with being single, or working, or married mothers. The role of motherhood is especially salient and significant as it is integral to the development of future generations. And feminism has never been mutually exclusive with motherhood. Michelle Obama is a revolutionary. She is redefining the role of the black mother on the most massive scale possible since Claire Huxtable.

In the same ways that fictive kinship binds all black people to one another in shame (like the Trayvon Martin tragedy or the Renisha McBride murder) so does positive imagery like that of Michelle Obama. For every SJSU student who is terrorized, Michelle Obama – and the President – presents an antithetical buffer encouraging young black people to remain hopeful that marginal exclusion and blatant racism will soon become a thing of the past.

For years, black women have been leaning in to a glass wall preventing them from expressing their innate skills, strengths, characteristics, and abilities. Michelle O shattered that wall. And while all of these white women continue to “lean in” to whatever anti-stereotype they face in White Privilege-Land, Michelle O will be defining her own path, as should all the rest of us.