Ever Been Arrested For ‘Standing While Black’? These Boys Have… 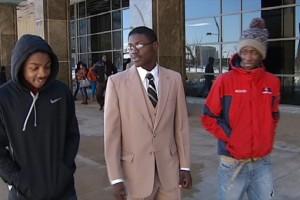 I once got arrested in high school for crossing the street to buy my vice principal a jelly doughnut during first period. The officer who ‘booked’ me didn’t care about my GPA, articulate speech, sound explanation, or anything else. He also didn’t care that I was walking back into school when he swooped in to arrest me. When I pointed out the Asian, Latino, and white students walking away from campus as he demanded I be quiet, he never even turned his head to look at them. He just cared about the color of my skin, or at least it felt like he did. So, I guess I was arrested for ‘walking while black.’

Well, three black teenagers in Rochester, New York were arrested last Wednesday when they were instructed by their basketball coach to wait for a school bus at a public sidewalk. After being told to ‘disperse’ (something you’d say to a gaggle of geese or a gang), they were each handcuffed and booked. Seems a little excessive right?

Well, that’s because it is. According to the Rochester Homepage, the three students of Edison High School were charged with disorderly conduct to which they have plead ‘not guilty.’ Apparently, local police thought it was disorderly for the boys to be standing on a public curb with a large group of peers awaiting pick up in a yellow school bus. When the boys tried to explain to the officers that they were following the directions of their coach to stand there, they were promptly arrested.

The police report mentions that “…Your complainant gave several lawful clear and concise orders for the group to disperse and leave the area without complaince [sic].” In other words, the cops told the boys NOT to follow the directions of their coach because their blackness was occurring in too large a proportion at an inconvenient moment. So, the boys were faced with the choice of listening to the directions from their coach and resisting the bullying from the police officers or listening to the police officers and missing the bus to their scrimmage game. What a quandary for these young men.

When the young men’s coach arrived at the scene, he implored the officers to allow the young men to attend their game. He was then threatened by officers who said they would take him ‘downtown’ if he didn’t refrain. Then, when the sergeant arrived, he sided with the arresting officer and threatened to take everyone in. Because, you know, all those black people in one place has just got to be a criminal act.

These young men were literally doing nothing wrong. In fact, they weren’t doing anything at all. They were simply standing on a sidewalk with their team on a non-school day awaiting a bus. Their coach did nothing wrong. But, he was threatened as if he were a child. The level of disrespect shown to him – as a grown man to whom the young men had been charged by their parents – harkens back to post-Civil War white treatment of the Zip Coon or the Sambo. The officers may as well had called him ‘boy.’

The last time this type of stuff was legal was back in the 19th century when vagrancy laws in southern states made it legal to arrest, possess, sell, or otherwise take possession of black people seen ‘standing while black’ in any public place. It seems we really haven’t changed much since then.

I wonder how many white people fear arrest while purchasing doughnuts or standing on street corners with friends. My guess is not too many. I am waiting on white outrage over this but I certainly won’t be holding my breath.