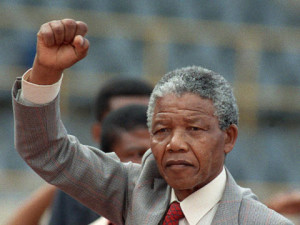 When I was in elementary school, we had a class assignment to profile a world leader. In my “diverse” school, there were an array of leaders chosen from across the world and from all points in history. And I, being the black element in my Southern California private school, chose to profile Nelson Mandela. And there is no way to really tell his story without things getting heavy.

My naive, youthful self didn’t understand the weight of my decision or the full meaning behind the subject matter, but looking back at that moment now, I see it as a turning point for me in understanding the racial divides in the U.S. and abroad. I remember being mesmerized with his 27 year prison stint. I was inspired by his rise to South Africa’s presidency. I was encouraged by South Africa’s triumph over apartheid.

At apartheid’s end in the mid-nineties, the South African government was still enforcing institutionalized racism. Your skin color actually determined what you had access to, what you could achieve, where you lived, and who you could love. Each citizen had a government issued ID that stated your race. This is what Nelson Mandela successfully ended in the 1990’s.

At his memorial service on Tuesday, the crowds spent the most of the ceremony cheering, nearly drowning out the speakers. It was not a time to mourn. It was a moment to celebrate Nelson Mandela’s life. It was joyous and festive.

You’d think that a man who had accomplished so much in such recent history would be enough of a story. But no. There isn’t enough scandal and intrigue in his story. So, now that he has passed, everybody seems to be turning this moment into something that isn’t much about him. And it seemingly took moments for the news media to be sucked into the side shows.

First up was the easiest target: President Barack Obama. He was there at the festivities alongside Presidents Clinton, Carter, and “W” Bush. And when he took the stage, he gave an awe-inspiring speech.

And that played well in the news cycle for about 10 minutes until they latched onto him taking a “selfie” in the stands while his wife Michelle gives him a “side-eye.” Then he had the nerve to shake Cuba’s President Raul Castro’s hand (He’s the leader of the free world and all, but he’s gotta be more stingy with the handshakes). And all of a sudden, that was all the was being talked about.

There were reports about how people felt about the handshake. John McCain made a Hitler allusion. Many cried disrespect that Obama would take a selfie at a funeral (for the record, this was the memorial not the coming funeral). Rick Santorum somehow managed to put the Affordable Care Act and apartheid in the same boat. And then the wave of conspiracy theories started to roll out.

The theorists already had enough to go on just with Mandela’s passing. Since the biopic Mandela: Long Walk to Freedom is due to hit theaters soon, there has been much speculation that his death was timed to give the movie good sales figures. This whole exercise is getting really old.

But the real tragedy in all of this is that Mandela is getting lost in it all. The revolutionary that has become the jewel of South Africa has passed away, and pundits across the globe are discussing selfies. One of the ultimate symbols and examples of dignity, strength, and perseverance is being used to score political points. The celebration of the life of  one of the most prominent human rights leaders in history is being pushed aside for conversational fodder that will be forgotten within a week.

I won’t give you a history lesson here (if you really want to know Mandela’s long history you can look it up for yourself), but I encourage you not to forget who is at the heart of all of this coverage. I hope that you look at all of the smoke, mirrors, and flashes of light and see them for the emptiness that they really are.

As long as we feed into this news media consumerism, the world will continue to turn a blind eye to the issues that matter. Nelson Mandela deserves more than that.

As a child, I learned about Nelson Mandela’s accomplishments and I was inspired. I put myself in his shoes and tried to envision how difficult each day must have been, standing up for what is right but having to endure the subjugation of your people while you remained incarcerated. I wondered what kind of mettle would make up a man who could live the life that he did. And that experience forever changed my worldview for the better.

Focusing on these side shows, while smacking of disrespect, also does a complete disservice to those who did not witness these events firsthand. And if we raise a generation that knows more about Kim K and the cast of Love & Hip-Hop than prolific leaders like Nelson Mandela, I fear the shape that our world will take.