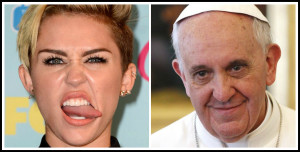 Now, y’all know I don’t too much care for young Miss Miley Cyrus. I am tired of seeing her junk looking junky. But, you know who I absolutely adore? Pope Francis. Since this March, he has consistently renewed faith in the unconditional love once professed by Jesus Christ. Not only that, he just saved us all from having Miley Cyrus named Time‘s “Person of the Year.” That might outweigh his late-night homeless service runs, Robin Hood-esque opinions on wealth distribution, and his awesome red shoes.

I haven’t written about Pope Francis much here because…well, because I just haven’t. It isn’t that I wasn’t taking notice of how much he was annoying conservatives by saying stuff about abortion, homosexuality, and birth control like:

That’s like the conservative trifecta of death. The leader of the Catholic Church literally said to conservatives: “Let that abortion, homophobia, and sex ‘ish go. Get your life!”

And, I can certainly appreciate that. But, Pope Francis as done much more than temper conservative psychosis. He has helped bridge the divides between rich and poor, theistic and atheistic, gay and straight. His message of compassion in the face of difference has resounded with people of all walks everywhere. I imagine that’s why he is enjoying such popularity and widespread support (even from folks who couldn’t care less about the Church). I mean, I became the guy’s 3,354,000th follower on Twitter today. So, yeah, people like him.

Now, I am not Catholic. I am Christian and I believe that Jesus Christ is Lord and Savior. But, I am of Protestant faith. Yet, I have been heartened by the Pope’s centered and authentic representation of persons who have been left out by the mainstream of the world. And little gems like this dig on “unfettered capitalism” doesn’t hurt either.

“As long as the problems of the poor are not radically resolved by rejecting the absolute autonomy of markets and financial speculation and by attacking the structural causes of inequality, no solution will be found for the world’s problems or, for that matter, to any problems…I beg the Lord to grant us more politicians who are genuinely disturbed by the state of society, the people, the lives of the poor.”

Now, you know these comments sent the right smack dab into a tizzy. They proclaimed, “Who does this Pope think he is? Professing a love for the poor, the sinner, the non-believer, and all those dirty people we avoid. What a socialist communist Marxist tree-hugging climate-change-believing Obama-stan…”

Well, today, Time announced that Pope Francis or ” The People’s Pope” had beat out folks like Edward Snowden (the guy who almost got America punched in the throat) and Ted Cruz (the guy whole almost killed America over Obamacare). But, he also beat out gyrating, tongue-jutting, giant teddy bear humping, pseudo-singer Miley Cyrus. And, what a triumph that is for human decency.

Here I was thinking all was lost to ‘slut culture.’ And, the world renews my faith in morality. This is news to warm the soul this holiday season. It sure brightened my day.