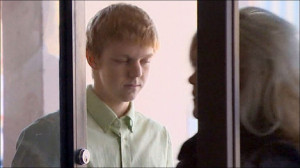 Oh, to be a rich white male in America. I could ride around in pickups inebriated without a care in the world. Don’t believe me? Well, that’s what 16-year-old Ethan Couch was doing with his high school friends when he mowed down four pedestrians, killing them. But, Mr. Couch won’t be serving any hard time for the murders. Because, his attorneys argued, he suffers from ‘affluenza‘ – a common affliction where rich white people are so used to not being held accountable for anything that you can’t hold them accountable for anything – the judge let him off with 10 years of probation and some rehabilitation.

So, if anyone ever asks you what white privilege has to do with the justice system, just direct them here where we discuss stories like this and also detail the unequal treatment of black people who have been imprisoned in Rikers for literally nothing. Then, if they still don’t get it, punch them in the throat.

The full story actually sounds ten times worse. Couch consumed stolen alcohol with his friends. He then got behind the wheel of the car and killed youth pastor, Brian Jennings, Hollie and Shelby Boyles, and Breanna Mitchell in a crash. His friends were thrown from the car and sustained serious injuries. He was found to have a blood alcohol level of .24 when driving his car. That’s three times the legal amount adults can have in their system. So, let’s tally that up: theft, DWI, driving with minors, assault with a deadly weapon, and murder/manslaughter. What’s the consequence? Probation. Yup, that sounds like a privilege to me.

What is really maddening about this case is that this young man had previously shown that he didn’t really give a crap about lawful behavior. He was previously found passed out in a car with a naked 14-year-old girl. But, I guess that wasn’t enough to show that this kid was a sociopath with no cognizance of personal responsibility.

The psychologist in the case argued that Couch’s actions were his parents’ faults since they never punished him and let him drink underage. I say, if that’s the case, send them to jail. I mean, someone needs to go.

Now, I am not going to go with the whole, “Now, if he had been black…” Although, I do feel inclined to name drop Marissa Alexander who was given a 20-year minimum sentence for shooting a warning shot and harming all of no one. Instead, I will just juxtapose this conversation with another.

Young black men are often taught about the perils of the US justice system. The prison-industrial complex aside, young black men have a personal understanding that they are ALWAYS a suspect. So, just like parents often have to have the conversation about the “birds and the bees,” parents of black children have to have another conversation. This conversation is the one where parents have to be honest and say, “Ya know, you have to behave differently than other people do when it comes to the police. Why? Well, because you’re black. And they might kill you”

An interesting story on Huffington Post explores the phenomena of white parents having to have ‘the talk’ with their adoptive black sons. They had to prepare their black children for the “…while black” cycle all of us (black people) experience at some point in our public lives.The cognitive dissonance they experienced – given that this entire concept of increased risk because of one’s race was foreign to them – illuminated their own white privilege while heightening their understanding of its absence for their own children.

In the black community, we have to prepare ourselves for hyper-vigilant monitoring from police and would-be police like George Zimmerman. Meanwhile, Ethan Couch has the liberty to mow down four people without consequence. We have preemptive action which sometimes results in ‘death by police.’ And, well-off white teenagers like Couch are innocent even after proven guilty. It almost seems unreal.

This is why I call white people on their bullshit. Period. I call B.S.

There is absolutely no way to spin this other than it being attributable to white privilege. And, the psychologist who coined the term ‘affluenza’ should be ashamed. Creating such a dubious term playing on the virus ‘influenza’ and ‘affluence’ is low.I mean, what kind of precedence are we setting in this country when “rich” is one’s primary defense in a murder case? Is that the same disease Lindsey Lohan suffers from? It, at least, has to be in the same viral family.

If ‘affluenza’ makes you a murderer who can’t be punished, then we need to revisit the word ‘murder.’ Last I checked, it didn’t require much context. Killing someone pretty much earns the title. Now, being white and rich gives you the right to pawn off said murder on someone else? B.S. white people. B.S.