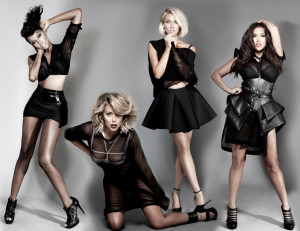 Since it was leaked that the girls were even going to go to lunch together, anticipation has been high for new music from DK. And finally, it has arrived.

On December 16th, the girls held their first performance since reuniting at the House of Blues in Los Angeles. Reportedly, they sang a couple of their old hits like “Damaged” and “Show Stopper”, as well as covering everyone from Miley Cyrus to Prince.

But the big news of the night was a performance of a new song titled “All In A Day’s Work.” Though not officially a single (the official single will be titled “Rage”), I could see this one burning up the charts. The one worry about the girls getting back together is their sound might stay just as it was in the past. However, this new song is fresh and very relevant, while sticking to the “girls in charge” image they’ve maintained both in and out of the group.

And they haven’t lost their moves either. Though 6 years removed from their last work, the girls show that they’ve still got it, busting out high energy and sharp choreography. They dipped it low, grinded, and twerked, all while coming off as professional instead of raunchy.

If anyone had a doubt that Danity Kane 2.0 would work, this video alone should silence any hate. Maybe time apart was all that they needed. It appears that maturity has helped them squash whatever animosity that remained and built a new group undoubtedly stronger and more polished than before.

Can’t wait for the official audio.

Are you feeling “All In A Day’s Work”?