Your White Privelege, My Microaggressions…or Death 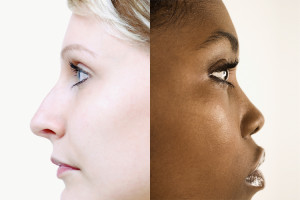 The term ‘microaggression‘ became my “Word of the Year” last week when I first read it. It perfectly sums up the tiny little peckings I experience daily from people outside of my racial and ethnic group. The awestruck and gratuitous hair touching, the shock at me not being able to name a member of The Beatles (and being unapologetic about it), the questions about fried chicken, and the tip-toeing around conversations about race are all gateway drugs for the microaggressive addiction we have in this country. And today, I read something else that made me believe these microaggressions are mostly due to white privilege. Go figure.

Author Heben Nigatu derives the meaning of the term “microaggression” from Columbia professor Derald Sue. It is the “brief and commonplace daily verbal, behavioral, or environmental indignities, whether intentional or unintentional, that communicate hostile, derogatory, or negative racial slights and insults toward people of color.” This definition is great because it includes accidental racism (you know, like the kind LL Cool J and country singer Brad Paisley recorded a song about) and the racism that happens when your mouth talks before your brain can tell it to shut up because you are in the wrong company.

In other words, microaggressions are what happen in a country that is still struggling to understand and accept the unique contours of a racially diverse environment. One doesn’t have to be racist to exhibit microaggressive behavior. All one has to do is forget that other races deserve the same dignity and respect as one’s own. That seems pretty easy right?

Now, we could simply blame racial insensitivity or a lack of exposure to other racial and ethnic groups as a root cause of our microaggressions. But, that would be too simple (and unnaturally symbiotic). Microaggressions would exist even with increases in interaction between ethnic groups, and racial insensitivity is just a buzzword which means virtually the same thing. Truthfully, white privilege is the only logical root cause of microaggressions between varying racial groups because it sets the standard for what is racially acceptable and what isn’t. Without white superiority – and privilege – there would be no functional yard stick by which to analyze racial groups.

Sadly, there is a flip side to this. While white privilege begets microaggressions, it also can be exploited for those who are aware of its power.

After reading a piece on Medium.com called “When “Life Hacking” Is Really White Privilege” by Jen Dziura, so many things in my life came into alignment. She argues that it isn’t the best thing to pretend that manipulating life “opportunities” for one’s own personal gain is normal or acceptable. Sometimes, stepping ahead in a line at the grocery store or bank, eating or drinking something that doesn’t belong to you, or getting extra amenities at a hotel aren’t just awesome perks of being industrious. You might sometimes be exploiting your white privilege to get something you neither earned nor deserve. And, since other racial and ethnic groups don’t share this ability to simply get things at-will – but instead are punished marginally if they even attempt to – you might actually just be a bigot, or racist.

“It happens all the time that white people claim not to be racist because they didn’t intend to be racist; they weren’t thinking about that at all…But there are many situations in which it is precisely your job to think about that. Nothing induces more rage in others than your taking what you do not deserve and not even noticing.”

See the subtle nuance there? Taking things that no one is using or that haven’t been claimed by anyone yet is still taking things. And, forgetting that white people have a whole lot more access to things to be taken is worth keeping front of mind. Simply misrecognizing one’s own privilege as happenstance is just as dangerous as outright, intentional racism. Got it?

Thinking about this made me remember an issue my husband and I once had at a movie theater in Los Angeles. We bought designated-seat-style tickets to see one of the Harry Potter films. They were really good seats in the center of the theater. And, after stopping to grab a burger and fries, we were running late to the movie. When we got there, a large party – probably about ten or so white kids – was sitting in our row. And, as we walked down the aisle counting the seats, we noticed they were in our seats.

We sat down in the dark theater gesturing to them that they were in our seats. And they simply pretended not to see us. My husband and I are both over six feet tall so they definitely saw us walk in. We could tell they knew something was up from their unnatural prostrate stature (which most people take when they don’t want to see the driver in the next lane over flick them off for bad driving choices). They knew they weren’t in the seats they paid for. But, they kept their heads straight, staring at the movie screen as if we weren’t waving our hands to get their attention.

After minutes of making a semi-silent scene, they finally relented and moved out of our seats. But, here’s the kicker: they were offended by us. One loquacious young lady sitting next to me commented about it the entire movie blaming us for coming late in the first place and implying that we lost the right to the seats we paid for by walking in after the previews.

Somehow, this white girl and her white friends believed they had some ordained dominion over the entire theater. Anyone not occupying their seat could be subject to losing it in seconds. Why? Because the white kids said so.

Dziura describes a movement beyond this type of behavior as something which “ involves acknowledging structural barriers that allow some people to do this while punishing others for trying. And it involves a healthy discussion of whether we should.”

Meanwhile, in Black America, this is what happens when you don’t pay your bus fare (CAUTION: This is an extremely difficult thing to watch. I teared up when I saw it).

It’s wonder more of us don’t try to rule the world like white people do, right?