Bump the Princess, In My Dreams, I’m the Prince like Phil Robertson 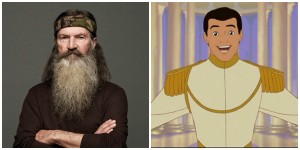 Oh to be a straight white man in America. I imagine it can, at times, be a lot like all of the Disney princes we all grew up on. I mean, think about it. In those stories Prince Charming never really has to do anything. The princess gets kidnapped, locked in towers, placed into curse induced slumber, and pretty much shat on by a villain. But, the prince gets to go to balls, ride around on stallions, eat the finest foods, lift not a finger and chillax until the poor princess finally crosses his path. Aurora’s prince fought a dragon I guess. But, I mean, you get the point.

I think Phil Robertson is kind of like one of those privileged princes. He is making a ton of money for walking around and doing little to nothing on the popular A&E show Duck Dynasty. And, even after making some pretty homophobic and ignorant comments to GQ Magazine this month, he was allowed to keep his job. That has got to be nice.

Remember when black actor Isaiah Washington used the f-word to a cast mate while filming ABC’s hit show Grey’s Anatomy? They sent him to f-word rehabilitation and subsequently fired his ass. He tried to explain himself on numerous occasions only to have the door slammed in his face. His career still hasn’t rebounded from that.

Phil Robertson basically called gay people weird and illogical only to double down on his words in a Bible study after the initial blow-up.

“ROBERTSON: We murder each other and we steal from one another, sex and immorality goes ballistic. All the diseases that just so happen to follow sexual mischief… boy there are some microbes running around now. Sexual sins are numerous and many, I have a few myself. So what is your safest course of action? If you’re a man, find yourself a woman, marry them and keep your sex right there. You can have fun, but one thing is for sure, as long as you are both healthy in the first place, you are not going to catch some debilitating illness, there is safety there.

Commonsense says we are not going to procreate the human race unless we have a man and a woman. From the beginning Jesus said, “It is a man and a woman.” Adam was made and Eve was made for this reason. They left their fathers and mothers and be united to become one flesh, that’s what marriage is all about. But we looked at it and said it was an outdated stereotype. When you look back at the human race, the sins have always been the same: We get high, we get drunk, we get laid, we steal and kill. Has this changed at all from the time God burnt up whole cities because their every thought was evil?”

So, yeah. Now Phil Robertson is giving PSA’s on disease and public decency. I am so grateful to him for setting the benchmark for intimate relations in America.

The truth is, Phil Robertson is a Christian. I am too. But, his words about disease, sex, and whatnot are not religious. Neither are his words about anuses, vaginas, and happy black people in the cotton fields. Maybe he loves everyone as he says he does. But, that kind of love doesn’t quite resemble the love Jesus showed the woman at the well, or the love the Samaritan showed the man on the side of the road. Maybe that’s why people are so offended.

The fact that A&E is allowing him to keep filming the show with no more than a threat of suspension (while they weren’t even taping the show) proves that this was never about enforcing some morality clause or other notion of personal responsibility. Cracker Barrel caved too. They want their money and white men spend money on other white men.

Part of me wonders why there wasn’t such an uproar when Isaiah Washington lost his job. But, then I remember that he’s black. So, he didn’t have white privilege on his side. Robertson is just one of many white straight men (like the ‘Affluenza‘ kid) who benefits from a system created, maintained, and managed by others just like themselves. I mean, some white men get to be people twice with this whole “corporations are people” thing. I would love to have a vote and then get to vote with my money too. That sounds friggin awesome.

Next time I see a little wayward girl in a princess costume, I am going to throw her a hat, some tights, a cummerbund, and a nice tailored jacket. Princes always win. And I am all about winning.